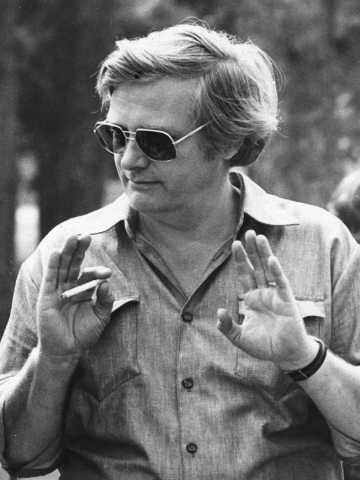 Alfred Hirschmeier was born in Berlin on March 19, 1931. At 18, he interned as a painter at the DEFA Studios, before studying stage and costume design at Berlin’s Meisterschule für das Kunsthandwerk (Master School for Arts and Crafts). In 1953, he returned to the DEFA Studios, where he began working as an assistant to set designers Willy Schiller and Otto Erdmann, both known for their work on UFA productions. Initially Hirschmeier followed their style, but he quickly developed his own innovations. His first original set designs were for Günter Reisch’s comedy Junges Gemüse and Kurt Maetzig’s epic Schlösser und Katen in 1956.

Over the course of his career, Hirschmeier designed the sets for over fifty DEFA productions in a wide range of genres, including sci-fi, fairytale, historic and contemporary. His collaboration with many great directors—such as Reisch, Maetzig, Konrad Wolf, Frank Beyer, Rainer Simon and Peter Schamoni—helped him develop his realistic, yet poetic style. One of Germany’s best film scenographers, he also became known for creating the first visual film scripts. These broke each scene into its various camera angles and provided detailed sketches of the placement of actors and other elements of the mise-en-scène. He often drew the storyboard onto photographs he took during extensive location scouting.

Hirschmeier always understood set design to be only one part of a film’s look, meant to work in tandem with lighting, camera and costume design. In the 1980s, Peter Schamoni worked with Hirschmeier, then DEFA’s head set designer, on two artist’s biographies—Frühlingssinfonie and Caspar David Friedrich - Grenzen der Zeit. He praised his outstanding talent for creating the aesthetic and emotional feel of a film. Some of Hirschmeier’s most memorable sets drew on imagination, as well as skill: the planet in Der schweigende Stern; the historical Spanish architecture in the period drama Goya; the prison settings in Der Aufenthalt; the 1960s-modern interior spaces in Egon Günther’s Wenn du gross bist, lieber Adam.

Many of Hirschmeier’s films screened and won major awards at prestigious international festivals, including Jakob der Lügner, the only East German film nominated for an Oscar. Six DEFA film posters—Der schweigende Stern, Ach du fröhliche…, An französischen Kaminen, Der geteilte Himmel, Königskinder and Orpheus in der Unterwelt—also carry Hirschmeier’s signature and are a testament to his talent as a graphic designer.

Hirschmeier continued working in film after the Wall came down in 1989, but also ventured into designing theater sets, including for Paul Hindemith’s comic opera Neues vom Tage (News of the Day, dir. Horst Bonnet) at the Deutsche Staatsoper Berlin in 1992. From 1990 until his death, he also taught at the Hochschule für Film und Fernsehen in Potsdam (now Filmuniversität Babelsberg Konrad Wolf), where he established a major in scenography.

Alfred Hirschmeier—who was honored with the German Film Award in Gold in 1996—died in Potsdam on March 27 of that year. His estate is archived at the Film Museum Potsdam and the Academy of Arts in Berlin.