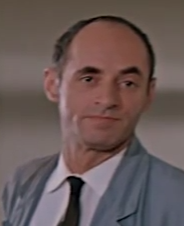 Gerry Wolff was born in Bremen, Germany, on June 23, 1920. Born to a Jewish family, he left Nazi Germany as a teenager for England in 1935. When WWII started in 1939, he was labeled an Enemy Alien and was detained at the Isle of Man. It was during this time that Wolff first acted in the camp theater. After his release, he worked as an editor for a London publishing house. In his free time, he joined the Free German Youth choir and theater group in London.

In 1947, Wolff returned to Germany. He played at the Berliner Ensemble starting in 1949 and joined the Volksbühne in 1956. In addition to the stage, he also played in film. He took on many supporting film roles, including in Kurt Maetzig’s Roman einer jungen Ehe, until he joined the DEFA Studios in 1961. His career as a film actor took off when Wolff was cast by director Frank Beyer in the concentration camp drama Nackt unter Wölfen. The film drew international attention when it was shown at the 1963 Moscow International Film Festival. Wolff also played in Egon Günther’s comedy Wenn du gross bist, lieber Adam that was banned in 1966 and not shown until 1990. In the role of Adam’s father, who together with his son helps to uncover lies with the help of a magic flashlight, was one of his few leading roles.

Wolff’s name was credited in almost 200 films for cinema and television. Although he was cast mainly in smaller parts, his oeuvre covered several genres. He played in spy films, Westerns, musicals and period movies, as well as in children’s films.

As a multi-talented artist, Wolff was also a reader for audio books and a singer. In 1969, he released his first record, Gerry Wolff: Portrait in Noten, that included the song “Die Rose war rot” for which Wolff was awarded a Special Prize at the Sopot International Song Festival. In the 1990s, Wolff presented programs mainly with Yiddish songs and performed with the Klezmer band Aufwind. He had already proven his talent when he sang two Yiddish songs in Konrad Wolf’s acclaimed film Sterne (Stars, 1959).

In 1999, Wolff gave an extensive interview about his life that was published as Gerry Wolff: Die Rose war rot in 2004, shortly before he died on February 16, 2005.