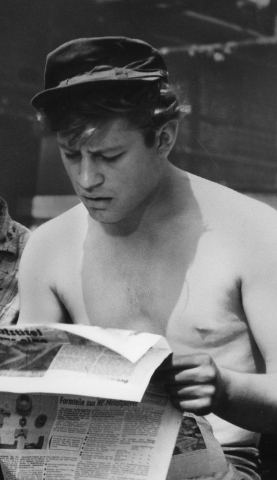 Kaspar Eichel was born in Berlin on November 27, 1942. His father, Wito Eichel, was an author and later became the director of the DEFA Studio for Synchronization. From 1960 to 1963, Eichel studied acting at the Staatliche Schauspielschule (State Academy of Dramatic Art, now: Hochschule für Schauspielkunst “Ernst Busch”) in Berlin. He has found engagements throughout his career at theaters in Senftenberg, Potsdam, Dresden and Berlin.

Eichel had his film debut in the lead role in Siegfried Hartmann’s adaptation of the Brothers Grimm fairy tale, Die goldene Gans. In 1966, he played one of the leading roles in Wolfgang Kohlhaase and Gerhard Klein’s Berlin um die Ecke, which was banned alongside eleven other films made or in production at the time. Nevertheless, Eichel soon found work in a supporting role for Kurt Maetzig’s Die Fahne von Kriwoj Rog

Since the 1990s, Kaspar Eichel has worked in theater and television, as well as in synchronization for film and video games and audiobooks. His extensive list of dubbing projects includes almost one thousand parts. He has given his German voice to many international movie stars, including Robert Redford, Richard Dreyfuss, Dennis Hopper, and Anthony Hopkins. Eichel has also worked as director and actor, and he has been at the Berlin Kriminal Theater (Theater for Crime Plays) since 2001.