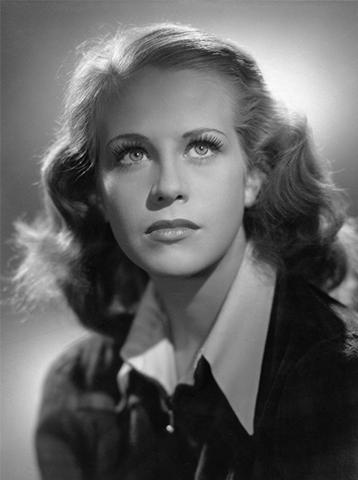 Hildegard Knef was born in Ulm, Germany, on December 28, 1925. At the age of 14, she took acting classes. One year later, however, she left school for an apprenticeship as an animator at the UFA Film Studio. Working at the studio, she dreamt about becoming an actress. After a successful screen test at UFA, she was accepted to the Staatliche Filmschule in Babelsberg with the option of being hired by the UFA Studio.

In 1943, Knef appeared for the first time in front of a camera. Her first film role was in Harald Braun’s Träumerei (Dreaming, 1943), a biographic film about the composer Robert Schumann; unfortunately, her scene was cut from the final version. However, directors noticed her talent and soon cast her in larger UFA film roles, including Gerhard Lamprecht's Die Brüder Noltenius and Helmut Käutner's Unter den Brücken. Her private relationship with Ewald von Demandowsky, who was the Reichsfilmdramaturg in Reich Propaganda at Minister Joseph Goebbels’s office and was later the head of the Tobis Filmkunst production company, helped Knef secure more important film roles.

Hildegard Knef performed on stage for the first time in summer 1944, in a small part in Ernst Karschow’s Der kleine Herr Niemand (Little Mr. Nobody) at the Deutsches Theater’s Kammerspiele. After WWII, Knef worked at the Tribüne and the Renaissance Theater in Berlin. Because of her relationship with Demandowsky, the British Allies banned her from theaters in the British sector of Berlin, but Boleslaw Barlog employed her at the Schlosspark Theater in Berlin’s American sector. Director Wolfgang Staudte, after seeing her on stage, cast her as Susanne Wallner in the first DEFA production and postwar German film, Die Mörder sind unter uns. In this role, she played a returning survivor of a Nazi concentration camp. The film premiered in Soviet-occupied Berlin on October 15, 1945 and set Hildegard Knef’s international career in motion. Life magazine called her the “new German star” in their May 1947 issue and Hollywood producer David O. Selznick offered her a contract.

Another success was her role as Christine Fleming in Rudolf Jugert's rubble film, Film ohne Titel, an ironic parody of filmmaking, for which she was awarded Best Actress at the 1948 Locarno Film Festival. That same year, Knef and her new husband, Kurt Hirsch, an American film officer, moved to the United States. After two years of unemployment in Hollywood, she returned to Germany to star in Willi Forst's Die Sünderin, the scandalous story of a prostitute and one of the first German films to break several taboos, including nudity and suicide.

In the 1950s, Knef was highly sought after for roles in Hollywood productions, as well as for German film production companies. Producer Erich Pommer signed Knef for three German productions. She played in Rudolf Jugert's Nachts auf den Straßen and starred alongside Erich von Stroheim in Arthur Maria Rabenalt's sci-fi story Alraune. Her first Hollywood production, after signing a 7-year contract with Fox Studios, was Anatole Litvak's Oscar-nominated film Decision Before Dawn. One of her most successful Hollywood roles was as the Countess Liz in The Snows of Kilimanjaro, in which she shared the screen with Gregory Peck, Susan Hayward and Ava Gardner, and showcased her singing talent with songs by Cole Porter. The composer was so captivated by her interpretations of his songs that he offered her the part as the communist official Ninotchka in his Broadway musical Silk Stockings, which premiered in 1955 and closed one year later after almost 500 performances.

When Knef was not chosen for the film adaption of Silk Stockings (1957), she broke her contract with Fox Studios and left America. In the following years she performed in various international productions, including the British adventure and fantasy film The Lost Continent (dir. Michael Carreras); the Italian historic film La strada dei giganti (dir. Guido Malatesta); and Claude Chabrol’s French crime story, Landru. Director Staudte also worked with Knef on two more productions: in 1958, she played a young French woman in Madeleine und der Legionär, the first production of the newly founded UFA in West Germany; and five years later Knef played Jenny in Staudte’s screen adaptation of Brecht and Weill’s Die Dreigroschenoper. In the following years, Knef appeared only a handful of times in films. Her last major roles were in Billy Wilder’s love story, Fedora, and as Anna Quangel in the film adaptation of Hans Fallada’s WWII story, Jeder stirbt für sich allein, for which she was awarded Best Actress at the 1976 Karlovy Vary Film Festival. In 2001, Knef was honored with a Bambi Lifetime Achievement award.

After signing a record deal with the Teldec label in 1962, Hildegard Knef focused more intently on her career as a singer and songwriter. Throughout her singing career, she released 23 records. Ella Fitzgerald commented on Knef’s husky voice, saying that she was “the world’s greatest singer without a voice.” Knef also became known for her authorship. In 1970 and 1975, she published two autobiographies: Der geschenkte Gaul and Das Urteil. The latter deals with Knef’s fight against cancer. When her friend and colleague, actress Romy Schneider died in 1982, Knef published a book about her life called Romy Schneider – Betrachtungen eines Lebens.