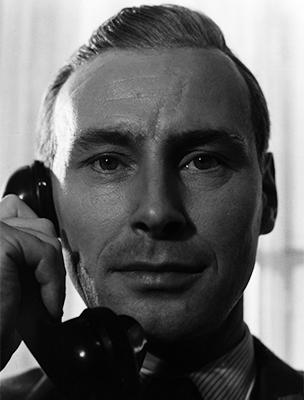 Actor Hannjo Hasse, best known for his portrayals of villainous characters, was a familiar face in many Eastern European films. He was born in Bonn on August 31, 1921. From 1938 to 1941 he studied acting in Berlin before being drafted to serve in the war. After 1945 he performed on stage in Nordhausen, Eisleben, Burg, Schwerin, Potsdam, and in Berlin at the Volksbühne and Deutsches Theater.

Eventually he landed at DEFA where his great versatility made him particularly well suited to playing evil characters. He was especially convincing in Nazi roles, as in Der Fall Gleiwitz, and brutally effective in others, such as the ruthless factory owner and Gojko Mitic’s nemesis in Spur des Falken.

In an interview about his role as the Hauptmann in Der Fall Gleiwitz, Hasse said, “I come across as arrogant, so I am suited for these roles which reveal --particularly to young people who didn’t consciously experience Hitler’s fascism-- how dangerous these criminals in SS uniforms were.”

Hasse also played a few positive characters, such as the coach and mentor of a young promising gymnast in Kurt Maetzig’s Das Mädchen auf dem Brett and the comical journalist in the three-part TV movie Das letzte Wort.

During the 1970s and 80s Hasse became even more widely sought after and played in numerous television and cinema productions in the GDR, Bulgaria, Czechoslovakia, Poland, Yugoslavia, and the Soviet Union.