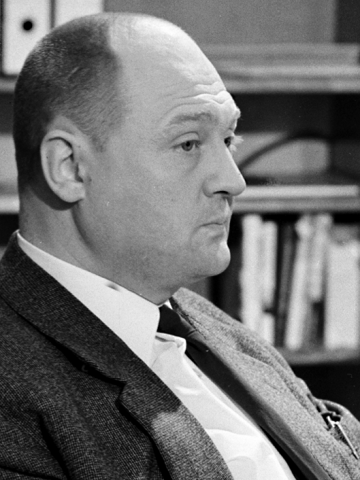 Rolf Hoppe was born in Ellrich, Germany, on December 6, 1930. Though his acting talent was recognized early on, he had to work at his family’s bakery. In his free time, he acted in a small theater group. In 1946, he co-founded a local amateur theater, where his talent as a comedian emerged. Hoppe took private acting classes and was finally accepted at the Staatliche Konservatorium in Erfurt in 1949.

His debut as a professional actor was at the theater in Erfurt in 1950. He then worked at theaters in Halle, Greifswald, Leipzig, Gera, Berlin and Dresden. In the 1980s, Hoppe shared the stage with the famous Austrian actor Klaus Maria Brandauer in Jedermann, at the Salzburger Festspiele.

From the early 1960s on, Hoppe also appeared in East German film and television productions. He was mainly typecast as evil, heavy-weight characters—such as villains in East German Westerns—and he rarely received the opportunity to play more sympathetic roles. In 1965-66, the banning of three films in which he was cast—Fräulein Schmetterling, Der Frühling braucht Zeit and Karla—was a blow to his career.

In 1995, Rolf Hoppe fulfilled one of his dreams: he founded and became the director of the Hoftheater Dresden in his hometown of Weißig. Hoppe, who was also known for his audio plays, died on November 14, 2018.