The War of the Mummies

“What is a mummy?”  Chilean workers answer: “A mummy owns capital.  He is an exploiter who robs workers of their wages.  A mummy is someone who steals workers’ surpluses.”

On September 11, 1973, the Commander in Chief of the Chilean army, Augusto Pinochet, toppled the People’s Unity government and President Salvador Allende was killed during the military attack on government buildings in unexplained circumstances.

This film portrayes Chilean realities before, during, and after the military coup.  The documentary filmmakers closely followed the complicated, embittered class war from 1973 to 1974. Shooting took place at rallys and in hideouts, in saloons and in the tented settlements of the poor, in the formerly state-controlled businesses, and at the revived stock market. This footage is also analyzed within the context of contemporary history. 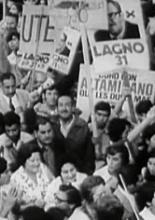