Biographical notes on the American singer, actor and civil rights activist Paul Robeson (1898-1976). At the height of his fame and skill, Robeson’s career was cut short by Cold War anti-communist hysteria. This documentary includes historic footage of the US civil rights movement; clips of Robeson’s speeches, performances and visits to East Germany (GDR) and the Soviet Union; and interviews with his son, Paul Robeson Jr., and the musicians and activists Harry Belafonte, Pete Seeger and Earl Robinson. Co-produced by the GDR’s DEFA Studio for Documentary Film and the West Berlin production company Chronos, with scenes shot in the U.S.

In the GDR, the American civil rights movement and Black activists were central to socialist solidarity in the international struggle for racial, gender and economic equality. The name of Paul Robeson, doubly admired because of his virtuosity as a singer and actor, was known to every East German. In recounting Robeson’s story, this documentary—now somewhat controversial—expresses admiration for the man and artist, while also making use of his role as a symbol.

"One of the most influential performers and political figures to emerge from black America, Mr. Robeson was under a cloud in his native land during the Cold War as a political dissenter and an outspoken admirer of the Soviet Union."   —The New York Times, 1976 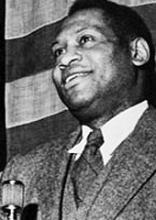 See You Soon in Berlin

Where Others Keep Silent

The Plum Trees Have No Doubt Been Chopped Down