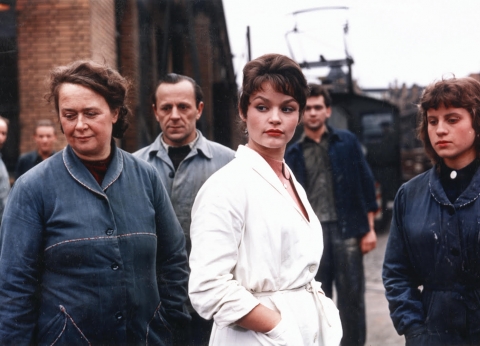 Sonya, an art student, loves the med student Dieter. And Siegi, a factory worker, loves the bricklayer Eddie. At a lavish Carnival party at East Berlin’s art school an unintentional exchange of partners begins. When everyone takes off their masks, Dieter realizes that he did not spend the evening with Sonya, but with Siegi!

Director Slatan Dudow, a collaborator of Bertolt Brecht and Hanns Eisler, was a celebrated DEFA director, yet East German officials had problems with the film. They saw it as undermining their plan to bring together the intelligentsia and workers; they also objected to the film’s sensuality, which they perceived as a challenge to socialist morality. Campaigns that were organized against the film, however, could not prevent the light and fanciful romantic comedy from becoming a box office hit. The audience was intrigued by the upbeat musical score, the young, fresh faces on screen and the sensuous story line.

Content warning: This film contains racist imagery, in the form of a white protagonist wearing blackface at a carnival party.

“Once again, the director created a model for how everyone can feel comfortable—especially smart young women who allow themselves and their men to enjoy the lovely feeling of freedom.” —Der Tagesspiegel

“This film symbolizes a longing for political relaxation after the sad years of Stalinism.” —Deutsches Historisches Museum

“Dudow literally painted the life of young people in East Berlin in the most beautiful colors. Love’s Confusion is a film filled not only with humor and optimism, but also with well-selected interiors and bright colors.” —Berlin Brotfabrik

“If one deleted some of the GDR expressions, this film could have been shot in France or Italy, or even—apart from the university lectures—in West Germany. These free-floating young people populate a society without social context. One can only hope that Slatan Dudow will soon give us a real film, not an insignificant piece like this.”

“Some viewers were confused by the comedy of errors mixing a working-class couple and its professional-student counterpart […] At the end, however, the temporarily divided halves are brought together, nice and clean, instead of mixing workers with the intelligentsia. [This film] was the start of big careers for the very young actresses Angelica Domröse und Annekathrin Bürger.” —Der Freitag

“Dudow’s film comes to life through its characters—people who have faces, tempers and their own will. As they go through their lives in society, they get into conflicts that trigger the plot.”  —Klaus Wischnewski, Deutsche Filmkunst

“Despite being rejected by GDR officials because it (ironically) showed the impossibility of love relationships between workers and professional-students, the film became a success with audiences.”   —Lexikon des internationalen Films

“A meditation on art and industry. [The film] addresses the [GDR] regime’s utopian vision of a grandiose cultural revolution.”   —Joshua Feinstein, Triumph of the Ordinary

A Case of Love Confused, by Joshua Feinstein 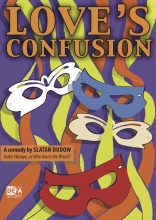