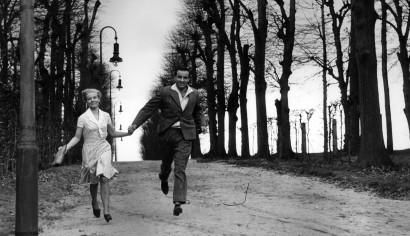 In the final days of WWII the German soldiers Michael and Jürgen are on a Russian military plane to Moscow. In flashbacks, they remember…

Michael, Magdalena and Jürgen were children together in 1930s Berlin, and Michael and Magdalena became lovers. When the Nazis came to power, they went their different ways: Jürgen joined the SA; Michael rebelled and was imprisoned; Magdalena, who had worried about his political activities, took Michael’s place. In 1943, Michael was moved from prison to Penal Unit 999 and deployed in Russia, where he unexpectedly met Jürgen again. Although they were still on politically different sides, when their unit moved to the Russian front, they deserted to the Red Army.

When the plane lands in Moscow, Michael sees Magdalena and Red Army soldiers boarding an airplane to Germany.

In 2018, Star-Crossed Lovers was restored for the DEFA Foundation at L'Immagine Ritrovata in Italy. The restoration was supported by Die Beauftragte der Bundesregierung für Kultur und Medien (Federal Commissioner for Culture and Media). The new 4K scan of this film was made using the original 35mm camera negative, with the original German opening credits  restored from a 35mm dupe positive. The restoration of the soundtrack primarily used the 35mm magnetic mix, but some musical sections were taken from the original quarter-inch magnetic soundtrack.

“Frank Beyer was one of the greatest directors working at DEFA, East Germany’s state-owned studio. Together with cinematographer Günter Marczinkowsky they created a richly inventive style informed by the new Polish and Czech cinemas. Marczinkovsky’s black-and-white work is extraordinary, favoring high and low angles, taking pleasure in the creative possibilities of light playing on water and capturing the confused, terrifying brutality of the battlefield. The early 1960s were a brief golden age of East German cinema and this is one of its masterpieces.”    —Robin Baker, British Film Institute

“Mr. Beyer kicks things into high gear with vivid cinematography and an artist’s eye for frame composition. It is a dazzling film from a brief but exceptional time for East German cinema.” —eastgermancinema.com

“A love story, as well as a history chapter from the beginning of the Nazi terror to the WWII trenches. It is an artistically remarkable film due to its expressive camera, symbolic images, directing and performance.”  —filmdienst.de

“Frank Beyer's second antifascist film stands out stylistically due to the clear references to the work of Andrei Tarkovsky.” —filmaffinity.com

“[The] influence of the new Czechoslovak and Polish cinemas was in evidence in the war film Königskinder.”   —The Guardian

“[The two lovers] are united by the antifascist cause, which is regarded as ultimately more important than romantic ideals.”   —Paul Cooke and Marc Silberman, Screening War: Perspectives on German Suffering

“A real discovery, this one. I’d seen a small retrospective years ago of director Frank Beyer’s later works, but this 1962 film really lays out its anti-fascist credentials from the off, following a young Armin Mueller-Stahl as Michael, a Communist worker in 1930s Germany who finds himself on the wrong side of the political ruling class. He’s eventually jailed and, upon the outbreak of war, sent to the Eastern front, which inevitably pushes him apart from his childhood sweetheart Magdalena (Annekathrin Bürger), though she too finds herself working for the Soviets. Obviously that latter fact can be put down to this being an East German film, so the Soviets play a pretty sympathetic role in things, but it’s great at charting the rise of Nazism in the backdrop of this story, and it’s even greater at the way it uses expressive lighting and camerawork to effectively convey their story, both before and during the war. A technical and emotional triumph.” —filmcentric.wordpress.com

“It was not crucial to us to make an ‘epic’ or ‘dramatic’ film, but rather to show  a true progression of the story, whose growing tension can capture the audience’s interest  until viewers are confronted with the question of their own conscience.” —Frank Beyer, BZ am Abend, August 30, 1962

A Screenplay in Time, by Frank Beyer.pdf

Choices and Destiny, by Peter Rollberg.pdf 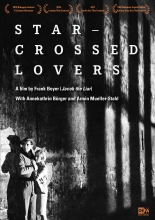 • “A Screenplay in Time,” by director Frank Beyer

Until Death Do Us Part

As Long as There Is Life in Me