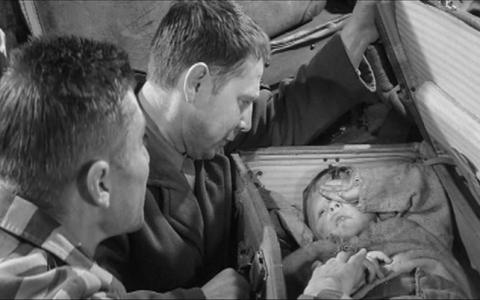 Jankowski, a Polish prisoner from Auschwitz, arrives at the Buchenwald concentration camp carrying a suitcase. Inside the suitcase is a small Jewish boy he has kept from harm. Once at Buchenwald, prisoners working in the property storage room discover the child. Although the sight of the innocent child moves many, his presence in the camp endangers the work of the camp's communist underground, who have organized a resistance group. As liberation of the camp approaches, the prisoners must come together to keep the boy safe from their Nazi captors.

Adapted from the novel by Bruno Apitz and filmed on location at Buchenwald concentration camp, this film features many who were themselves prisoners of the Nazis, as well as younger actor Armin Mueller-Stahl.

Based on a true story of inmates who risked their lives to hide a small Jewish boy shortly before the liberation of the camp.

"It is a powerful narrative of the last weeks of Buchenwald…A moving experience."
— Variety

"The film, shot in stark black and white tones, is understated and surrealistic in its portrayal of telling details that it sometimes resembles a documentary."
— The Canadian Jewish News, 2002

"Although there has been an abundance of films from the Eastern European bloc on the subject of concentration camps, there are few to match this East German production for sincerity and production quality. It is a powerful narrative of the last weeks of Buchenwald."
— Variety, 1964

"One of the most powerful and accomplished anti-fascist films produced in East Germany."
— Vancouver Pacific Cinematheque

While All Germans Sleep

The Rats Sleep at Night