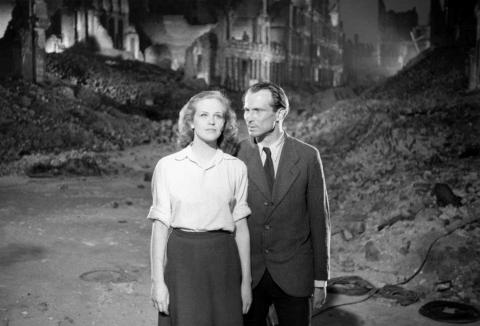 In 1945, the artist Susanne Wallner (Hildegard Knef) returns to Berlin after spending three years in a concentration camp. Yet amid the ruins, she is filled with a renewed energy for life. When she arrives at her old apartment, she finds that Dr. Hans Mertens (Ernst Wilhelm Borchert) has taken up residence there. A physician and former German officer, Mertens is haunted by the wartime execution of Polish civilians, which he did nothing to prevent. Under Susanne's care, the broken man gathers new strength. Then, by chance, Mertens meets his former captain (Arno Paulsen) and decides to take the law into his own hands.

The Murderers Are among Us was the first film made in Germany after WWII and has since become a classic. It was supported by the Soviet Allies and produced by the newly-founded DEFA Studio. Its film noir style successfully blends German expressionism with a striking affinity to Italian neorealism.

“The Murderers Are among Us created the groundwork for the Trümmerfilm (Rubble Film), a style somewhat analogous to Italian neorealism. The film shares neorealism’s focus on location shooting and an attention to the routines of everyday life, but places more emphasis on a psychological approach that also nods to the expressionist films of the Weimar era—it examines German guilt, trauma, psychological repression of crimes committed by ordinary people, and the necessity of accepting responsibility.”  —Cinema Year Zero, Anthology Film Archives, 2021

“The picture that marks the birth of the postwar German film industry!” —Artkino, 1948

“Visually reminiscent of the best of German expressionism, it's a socially conscious examination of German guilt.”         —Glenn Erickson, DVD Savant

“Directed by one of the most important postwar filmmakers.”            —Ralf Schenk, film historian

“A film that directly deals with the weight of the Nazis on the collective German psyche.” —Donato Totaro, OffScreen.com

“The Murderers are Among Us is a haunting and indelible film on the process of healing and reconciling with personal accountability.” —filmref.com

“With The Murderers Are among Us, German cinema had announced its return to world screens. Staudte’s film could be favorably compared to the contemporary world cinema, including the Italian neorealism of directors like Roberto Rossellini.” —Stephen Brockmann, A Critical History of German Film

“This first rubble film was a hopeful beginning to come to terms with the German past.” —Christa Bandmann and Joe Hembus, Klassiker des deutschen Tonfilms

The Murderers Are Among Us on US and UK Screens, 1948 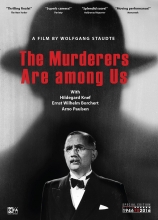 Chronicle of a Murder

Marriage in the Shadows