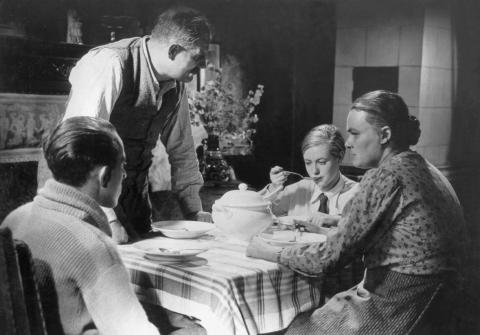 A working-class family in Berlin in 1931 where survival is difficult, with massive unemployment in the wake of the Great Depression. After Anni's brother commits suicide in despair, her family finds itself forced to move to Kuhle Wampe, a lakeside camp on the outskirts of Berlin, now home to increasing numbers of unemployed. When Anni's relationship with Franz ends, she moves back to Berlin and gets involved in the workers' youth movement.

The DVD release is the 2008 digitally-restored transfer of the original Weimar period masterpiece (69 minutes). The DEFA Film Library collaborated on the restoration with absolut MEDIEN and OMNIMAGO using a 35mm duplicate negative and positive produced from a 35mm print that was given to the East German State Film Archive by the Cinémathèque Française in 1956 or 1957.

The Kanopy release presents the 2020 HD version. It is most complete version of the film (74 minutes) with vastly improved sound and image quality. The films was digitized and restored in 2K resolution at ARRI Media on behalf of the Deutsche Kinemathek, Berlin. A 35mm nitrate print of the original German version from the British Film Institute served as a template. Additions were made from materials held by Praesens-Film AG at the Cinémathèque Suisse, a fragment of a 35mm nitrate print of the French version and a duplicate negative of the German version. However, the censored passages couldn’t be reconstructed.

Already censored in March 1932 for raising controversial issues, such as abortion, and portraying left-wing youth culture, the film was then banned by the Nazis in 1933 for having “communist tendencies.”

“The politically most radical and formally most innovative film of the period.”   —Sabine Hake, German National Cinema

“Notable for its experimental filmic techniques as well as the intensity of its acting and the stirring songs of Hanns Eisler.”   —Tate Modern, London

“The one clearly Communist film made during the Weimar Republic.”   —Reclam Film Guide

“Nowhere in the cinema has Brecht’s aesthetic and political theory been so well dramatized and illuminated.”   —Harvard Film Archive

"The romance between Annie and Fritz is told in a prosaic fashion, as is also the affection linking Gerda and Karl; leaders in the labor movement who befriend Annie. Hertha Thiele's acting is excellent, but she has nothing, like the opportunity to display her ability as she had in "Maedchen in Uniform." The performances of the other players are highly satisfactory and the chanting of fighting slogans by the young workers is effective. Kuhle Wampe is prefaced by screen talks from Amos Pinchot, Norman Thomas, Hendrik Wiltem Van Loon, Mrs. Lincoln Steffens and others denouncing Hitlerism and the persecution of the Jews."   —The New York Times, 1933

"At the Hairdresser's with Brecht and Dudow" (Interview)

The Second Life of Kuhle Wampe 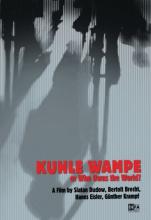 The Axe of Wandsbek

Bertolt Brecht: Reflections on the Root of Evil