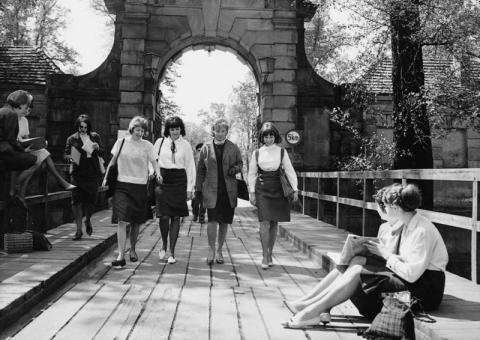 Held in the beautiful Pioneer Valley of western Massachusetts, the DEFA Film Library’s biennial Summer Film Institutes (SFIs) provide an opportunity for scholars to spend a week together in a relaxed setting, watching movies and discussing (East) German and other cinemas from a variety of perspectives.

The SFIs in 2003, 2007, 2011 and 2013 have in common that they explored how East German film interfaced with filmmaking and filmmakers outside the GDR and with the sociopolitical events of the Cold War period. The first SFI, held in 2001, focused on ways to incorporate the range of films made in East Germany into curricula and classroom activities. In 2005, the SFI was incorporated into a NEH Institute on German and European Studies that focused on treatments of history. The 2009 SFI—hosted by guest professors Sabine Hake (UT Austin) and Larson Powell (UMKC)—focused on issues in film historiography and methodology.

SFIs are designed to promote discussion and networking among researchers and educators interested in the artistry, history and role of (East) German film in a changing world. Participants range from doctoral students to filmmakers and seasoned faculty at colleges and universities across North America and Europe. Groups of participants have often gone on to work together to present panels and panel series on SFI topics at the annual conferences of the German Studies Association and the Society for Cinema and Media Studies. Launched in 2015, the DEFA Film Library book series on Film and the Global Cold War (Berghahn Books, New York/Oxford) offers a publication outlet for volumes on Institute and other topics.