Designed by Hartford, CT architect William Brocklesby, South College was constructed in 1885-1886 and replaced the original South College on the same site, which was gutted by fire in 1885.

According to Argus Architecture & Preservation:

The Massachusetts Historical Commission record calls the style of South College "Chateauesque", and the herringbone-patterned gables are characteristic of the Tudor Revival. But underneath what today seems a romantic, picturesque style, South College is a rational and robust building that deftly utilizes and synthesizes the materials and architectural vocabulary of its own time and place - including the irregular and articulated massing common to the late 19th century styles, the climate-appropriate gable and hip roof forms, the granite, brownstone, red brick and slate materials of New England.

The original multiple purposes of the building are reflected on the building exterior. The south wing was three vertical sections (or "houses") of dormitories; the east wing originally contained a museum and classrooms; the tower contained faculty and administrative offices, as well as a meteorological observatory.  Exterior masonry materials are Pelham granite, Longmeadow quarry brownstone (sandstone), and bricks from Montague City.

The entire building has now been completely renovated, some portions restored to their original materials, and all mechanical, electrical and plumbing (MEP) systems, including life-safety alarms and sprinklers, have been updated and upgraded.  The building has also been brought into full compliance with the Americans with Disabilities Act (ADA) for accessibility, and many existing area trees have been protected and preserved.

A major utility upgrade was required to support new construction and renovation at South College.  Work began in October or 2014 and included expanding capacities in water, steam, data and electricity in the upper Hicks Way corridor.

A four-story, 60,000 SF addition to South College was also completed for the Hicks Way/west side of the building.  The addition includes common areas, faculty offices, classrooms and auditoria with state-of-the-art audio-visual and communications systems.  Both in terms of mass and materials, new construction was designed to complement and augment the historic structure rather than overwhelm or compete with it.

The total project cost was $65M, financed by UMass Amherst through the University of Massachusetts Building Authority (UMBA).

Questions about this project should be directed to the UMass Design & Construction Management capital project manager, Henry Merriman, at 413-577-1722 or hmerriman@facil.umass.edu. 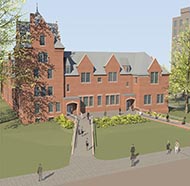 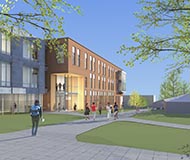 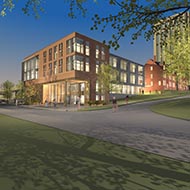 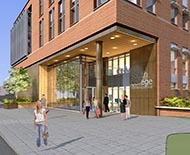 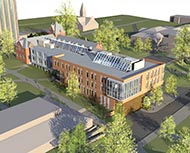