Skip to main content
The University of Massachusetts Amherst
We stand for sustainability.

< LEARN ABOUT YOUR CAMPUS

The built systems of the campus represent substantial investment in the infrastructure and facilities necessary to support the mission of the University. The following are key issues the University will need to address: 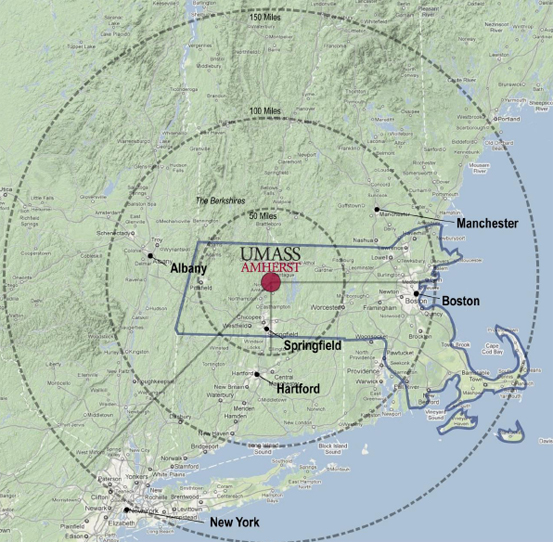 The primary catchment area for student enrollment is the Commonwealth of Massachusetts, then the New England region, then nationally and internationally. Currently, 81% of UMass students come from Massachusetts and about 7% come from New England. With so many students' homes within a few hours drive of Amherst, many tend to return home on a regular basis. This pattern of activity likely exaggerates students' desire to bring cars to campus. As part of the university‘s sustainability mission, alternatives to personal automobiles should be pursued including rail access and ride share programs. 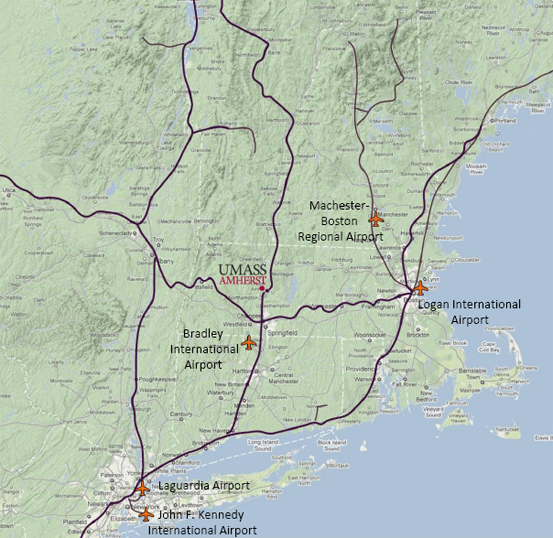 Amherst is accessible by train via Amtrak service –most trains arrive by way of Springfield. Springfield is serviced by trains from Boston, Albany, and New York. The train station is located approximately two blocks east of Amherst Center. Local bus routes provide service between the train station and campus. However, train service is limited to one or two trains per day. Using rail for commuting may be difficult but may offer alternatives for students who wish to occasionally travel within the region.

The campus is served by major airports in Hartford, CT, Boston, MA, Manchester, NH, and New York City. All of these airports have access to rail networks which can serve the campus. These airports are also major destinations for out-of-state students arriving from or returning home. Some campuses provide an airport shuttle service to the airport to reduce the need for personal automobiles. 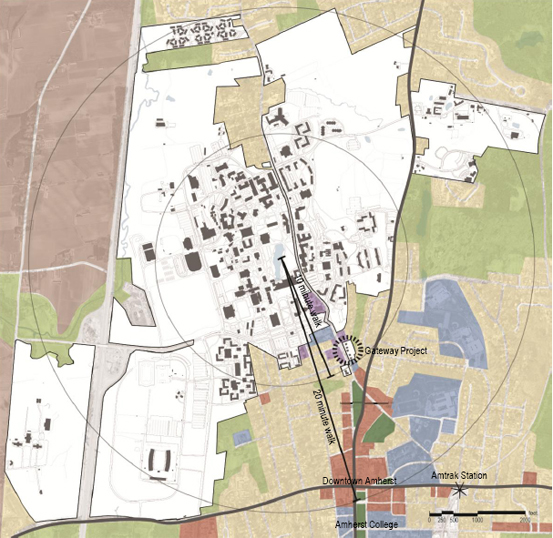 The majority of the campus is located in Amherst, with the western edge in Hadley. The amenities of downtown Amherst are approximately one mile from the center of the UMass campus, however the distance seems much further.

The town of Amherst has initiated the Gateway Project on University property along North Pleasant Street which will add retail, services, and housing along the way to downtown and will help link the town and University.

Developing clearer gateways, continuity of uses and amenities, and improved bicycle and pedestrian circulation would strengthen the transition and connections between town and campus. 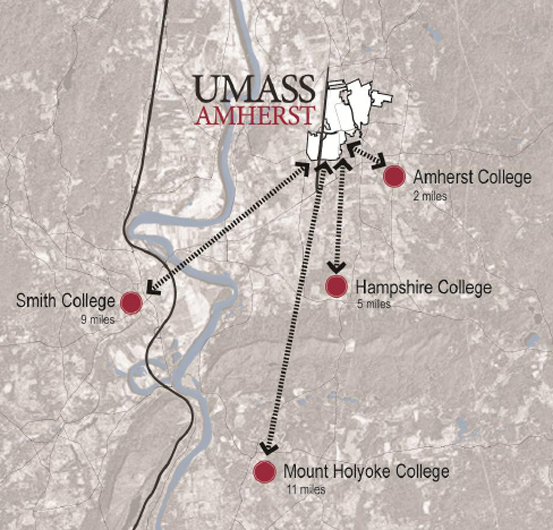 Five Colleges, Incorporated is a consortium established in 1965 to promote the broad educational and cultural objectives of its member institutions –four private, liberal arts colleges and UMass. Students are allowed to take classes at the other institutions and vice versa. The current public transit schedules among the Five Colleges is a challenge to students interested in studying at more than one institution; UMass is the most popular institution for secondary enrollment. 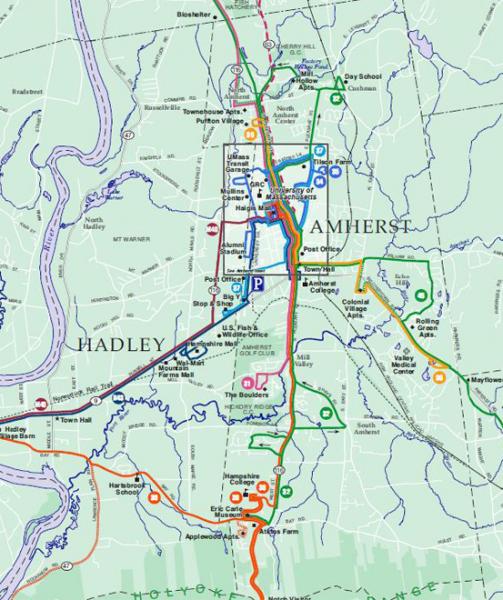 The Campus is well served by regional bus service by PVTA throughout Amherst and the immediately surrounding towns. All routes serve UMass Amherst from a hub at the Haigis Mall and are fare-free for students and employees. In 2009, 29% of UMass employees used the bus –up from 17% in 1999.

Intercity bus service is provided by Greyhound and Peter Pan Bus Lines from the Haigis Mall. 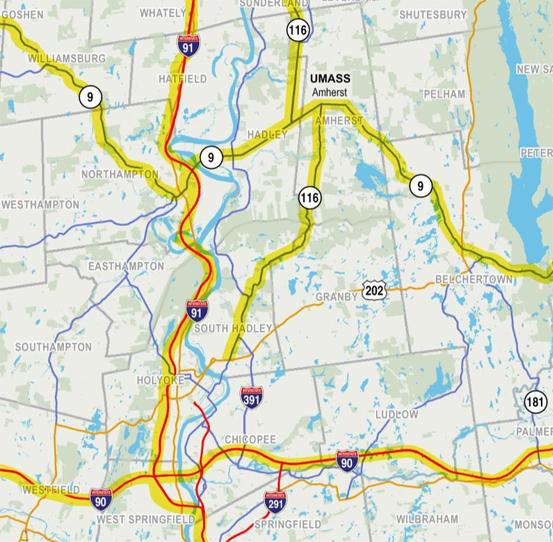 Regional access to the campus is via Route 9 and Route 116. These two routes connect to Interstates 90 and 91 linking UMass regionally to Boston, Worcester, Springfield, Hartford, and Albany.

Access to UMass Amherst from the east from I-90 is circuitous and could benefit from additional signs through Palmer and Belchertown. I-91 is a more direct access route, however Route 9 is a constrained corridor through Hadley –a heavily used commuter and retail corridor. 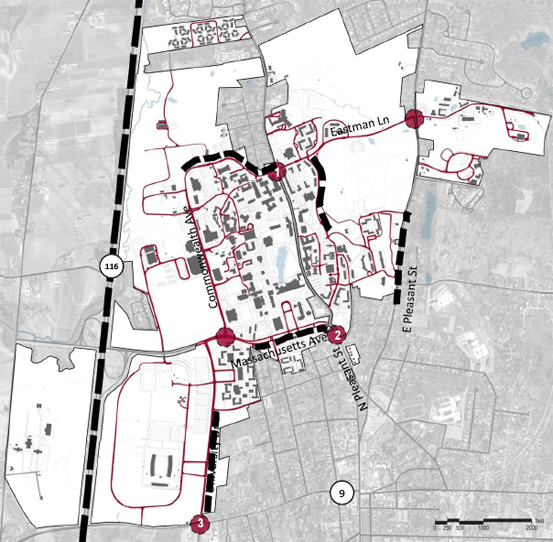 Strengthening the gateways into the campus has been a common theme from past planning efforts. Specifically, better defining these gateways to convey a sense of arrival, calm traffic, and provide way finding.

North Pleasant Street currently does not effectively convey a sense of arrival from the north at Eastman Lane/Governors Drive (1) or from the south at Massachusetts Avenue (2). Similarly, at the intersection of University Drive at Amity Street (3) a stronger sense of arrival is needed.