The Translation and Interpreting Studies Program works closely with Comparative Literature and the Languages, Literatures, and Cultures Department in the College of Humanities and Fine Arts at the University of Massachusetts Amherst. The support that the Program receives from faculty and scholars at UMass Amherst has been strong, where many faculty in language and literature departments either translate themselves of publish about translation phenomena. The Translation and Interpreting Studies Program supports the journal Metamorphoses, a journal of literary translation published by the Five College Faculty Seminar on Literary Translation. Jim Hicks is the executive editor of the journal The Massachusetts Review, which now publishes 30-40% translations and has founded the Jules Chametzky Prize for the best translation each year. The Comparative Literature Program sponsors a Visiting Scholars Program, in which leading scholars of translation studies are invited to give a public lecture on translation and to meet with faculty and students in the classrooms. In addition, the Program has hosted several conferences at UMass, including the second American Translation and Interpreting Studies Association (ATISA), two International Shakespeare conferences, and, in conjunction with Binghamton University, several graduate student conferences on Translation Studies. 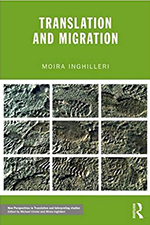 Translation and Migration (2017) examines the ways in which the presence or  absence of translation in situations of migratory movement has currently and historically shaped social, cultural and economic relations between groups and individuals. Acts of cultural and linguistic translation are discussed through a rich variety of illustrative literary, ethnographic, visual and historical materials, also taking in issues of multiculturalism, assimilation, and hybridity analytically re-framed. This is key reading for students undertaking Translation Studies courses, and will also be of interest to researchers in sociology, cultural studies, anthropology and migration studies. 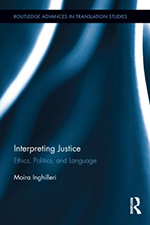 Interpreting Justice: Ethics, Politics, and Language (2012) presents some of the the findings of the author's research on asylum hearings conducted in the United Kingdom during the period 2002-2007. The research examined the role of interpreting in asylum adjudication process through interviews with asylum applicants, lawyers, judges, and interpreters and observations of asylum appeals hearings. The book also discusses the role of local and millitary interpreters during the Iraq War and in Guantánamo Bay just six months after 9/11. It examines the geo-political, cultural, and ethical factors involved in legal and military contexts like these and theorizes social, cultural and institutional impacts on interpreted communication. It calls attention to the limitations of the interpreter role as constituted in existing professional codes of ethics and argues for a more expansive role for interpreters in legal and military contexts. 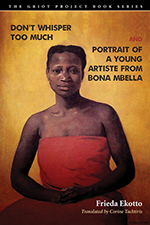 The collection Don't Whisper Too Much and Portrait of a Young Artiste from Bona Mbella is a translation of the Cameroonian author Frieda Ekotto's novella and short stories. Ekotto's novella is widely recognized as the first Francophone African novel to depict women loving women in a positive light. The translation appears as part of Bucknell University Press's Griot Project Book Series (2019). Don’t Whisper Too Much follows young village girl Ada’s quest to write her story on her own terms, outside of heteronormative history. Bona Mbella focuses on the life of a young woman from a poor neighborhood in an African megalopolis. And “Panè,” a love story, brings the many themes from Don’t Whisper Too Much and Bona Mbella together as it explores how emotional and sexual connections between women have the power to transform, even in the face of great humiliation and suffering. 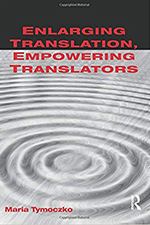 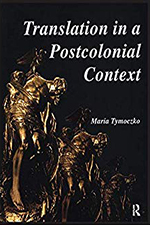 The prizewinning book Translation in a Postcolonial Context (1999) continues to be relevant today, particularly for scholars of literary and cultural development in emerging nations. In a series of case studies, Maria connects translation in Ireland to a number of contemporary theories of translation. She also discusses the work of a number of important literary translators, including Standishn O’Grady, Augusta Gregory, and Thomas Kinsella, and shows how the translation movement well intersects with the work or the great Irish writers of the 20th century, including William Butler Yeats and James Joyce.

Books by Emeritus and Associate Faculty 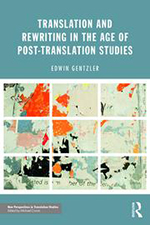 Translation and Rewriting in the Age of Post-Translation Studies (2016) argues that rewritings of literary works have taken translation to a new level: literary texts no longer simply originate, but circulate, moving internationally and intersemiotically into new media and forms. Drawing on translations, rewritings, and other forms of creative adaptation, he examines the different translational cultures from which literary works emerge, the translations which ensue, and the post-translation repercussions those translations have on any given society. Four chapters give analyses of several classic works and their rewritings: Midsummer Night’s Dream in Germany, Postcolonial Faust; Proust in the United States; and Hamlet in China. With examples from a variety of genres including music, film, ballet, comics, and video games, this book will be of interest for all students of translation studies and contemporary literature. 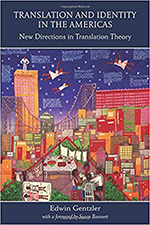 Translation and Identity in the Americas (2008) covers translation studies research from the United States, Brazil, Canada, Latin America, and the Caribbean, and shows that translation is one of the primary means by which a culture is constructed. Translation in the Americas, he argues, is less something that happens between separate and distinct cultures and more something that is fundamental to the establishment of those very cultures. Sherry Simon, from the University of Concordia, Canada, writes, “Edwin Gentzler’s latest book travels a lively itinerary from north to south, investigating the complexity of language interactions from Quebec to Brazil. This is a vivid and strikingly original perspective on the melange of cultures which make up the Americas.” 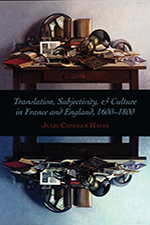 Translation, Subjectivity, and Culture in France and England 1600-1800 (2008) examines the evolution of neoclassical translation theory from its origins in France to its importation to England by royalist exiles and its evolution in response to the philosophical and political ideas of the Enlightenment. Julie shows how translators working from a range of literary, political, and philosophical viewpoints speak to such issues as the relationship of past to present, authorship and the status of women writers, and the role of language in national identity. The book should appeal to translation studies scholars and historians, literary scholars of both England and France, women studies scholars, and practicing translators.