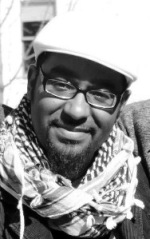 The Center for Multicultural Advancement and Student Success (CMASS) has an amazing staff that is passionate and committed to UMass’ thousands of students. One of these passionate staff members is Tyson Rose, an admirable individual whose mission is to help students of color break barriers in a modern world where racism is very much still an issue. Tyson is from New Bedford, Massachusetts and a third generation Cape Verdean, whose grandparents were immigrants. He has three older brothers and although his parents are separated, he is still close with both of them. His parents’ work ethic was something that inspired Tyson and helped foster his own self-discipline.

Growing up with a diverse group of people composed of Cape Verdeans, Irish, Portuguese and Puerto Ricans, Tyson’s life has never lacked any sense of culture. His first elementary school was Carney Academy, a great school for him with decent resources and the opportunity to be in “gifted” courses. Although his principal was very stern, his message that you can be whatever you want as long as you work hard resonated with Tyson at a young age.