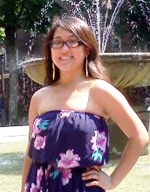 Lena Ngor was born and raised in Boston, Massachusetts of Cambodian and Chinese heritage. Her motivation to effect positive change developed at an early age. She was exposed to different standards of living during her daily travel from her middle class neighborhood to her babysitter who lived in public housing. Her circle of friends at the private school she attended was homogenous.

During a trip to Cambodia “I saw a little girl selling trinkets and this man complemented her ability to speak English, she replied, ‘no sir, I don’t speak well. I need to know this much to get this money.’” The girl did not think of English as a way to become better educated just as a way to get by due to her circumstances.

These and other travel experiences to Southeast Asia and Europe inspired her to concentrate in Political Science and International Relations. “I like diplomacy and being in an environment where different nations come together. This way I can get to the core of change.”