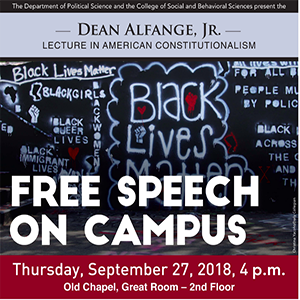 AMHERST – Nadine Strossen, former American Civil Liberties Union (ACLU) president, spoke at the University of Massachusetts Amherst on Thursday, Sept. 27, touching on free speech and her new book, HATE: Why We Should Resist It With Free Speech, Not Censorship.

The event, which was the Political Science Department’s 14th Dean Alfange Jr. lecture, welcomed a packed room of community members in the Old Chapel. Opening up the lecture, Strossen – who is currently a professor of constitutional law at New York Law School – said that non-censorial measures should be taken against hate speech.

“If you look at the track record of censoring hate speech, it does more harm than good,” said Strossen. Strossen also mentioned that “counter speech is more effective” when it comes to dealing with hate speech.

Noting the way that speech laws are currently written, Strossen went on to state that no one has been able to write a law targeting hate speech that doesn’t also affect speech that is beneficial to society.

“We should not let words hurt us. We should develop the level of self-confidence and pride to rise above it,” said Strossen.

This lecture comes following a contentious time at the university.

Earlier that day, students rallied and marched from the Whitmore Administration Building to the Student Union to protest the response to a racist, hate-message written in a campus bathroom, and shine light on the larger racial climate.

Closing the lecture, Strossen mentioned the significance of Civil Liberties in ACLU, stating that they are here to protect everyone.