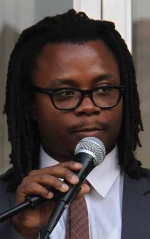 On a campus as large as UMass Amherst, it’s hard to stand out amongst your peers. But Emahunn Campbell, a current PhD Candidate and lecturer here at UMass, easily stands out from his 27,000 peers as a force for change in our community. Campbell has proven himself a worthy advocate for social justice not only in our community, but throughout the United States. He is passionate about promoting awareness of racial hatred in our nation’s system and making a difference in society.

Emahunn, whose name is Islam for “faith,” hails from Fredericksburg, Virginia. As a high school student, his passion for social activism was awakened when he and his friends were detained by police for two hours after his friend was accused of stealing money even though there wasn’t any evidence supporting the accusation. This incident, along with his father’s and brother’s incarcerations, sparked his interest in learning more about mass incarceration in the United States, which later became useful knowledge to help his advocacy work.
Read more ...