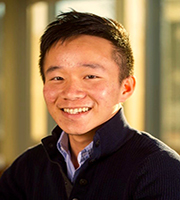 “The first step to figuring out exactly what you want to do is a big hurdle. Once you figure it out, it’s not easy, but it’s easier.”

Soun Heang-Lee is someone quite familiar with defying life’s hurdles. A senior Bio-Chemistry and Molecular Biology major, Heang-Lee is a student with a lot to prove. He moved to Revere, Massachusetts (and eventually Lynn, Massachusetts) in 2006 with his family from Cambodia. “Everything was different,” he recalled. When he moved to America, he was just beginning the seventh grade. His parents made the move in hopes of a better education for Heang-Lee. Additionally, he added that “corruption was big” in Cambodia.

Heang-Lee began at the University of Massachusetts Amherst as a chemical engineering major. During his senior year of high school, he was in an AP Calculus class. “I was very good at calculus.” He recalled his teacher telling him about the field of chemical engineering and pushing Heang-Lee to pursue that field because it was the closest to his academic interests. However, in his second semester freshman year, Heang-Lee dropped chemical engineering. “I didn’t like it at all.”

Heang-Lee has accomplished many milestones during his time at UMass. He has an impressive resume. He spoke of his two paid research internships; one at the University of California San Francisco (UCSF) and one at the Massachusetts Institute of Technology (MIT).

At UCSF, he worked 40 hours a week. “It was meant to give you the experience of a graduate student.” Heang-Lee worked with Dr. Jonathan Weissman. The lab focused on attempting to understand protein folding, chaperones and how they can lead to diseases.

At MIT, he had a similar experience. There, he worked with Dr. Mary Gehring on plant epigenetics. “I was trying to understand the mechanism and function of gene imprinting during seed development in plants with an application in increasing seed size and development.” This program had a 15% acceptance rate.

Additionally, his months abroad at the University of Oxford provided him with a lot of insight into his future.

Heang-Lee has been accepted to both USCF and Harvard University for graduate school with all tuition waived plus stipends. His career goal is to be a university professor. “I want to research and teach. Hopefully, I'll have my own lab and teach undergrads.”

He offered some advice for his fellow undergraduates. First, he suggested exploring opportunities for summer internships and research labs (if those are applicable to your major). Then, he suggested something a bit more philosophical. “You have to advocate for yourself, especially if you are  a first generation student.  Your parents have never gone to school so they can’t offer that kind of advice. You have to get that initiative yourself.”

Heang-Lee acknowledges that he had a lot of support along the way. “I think CMASS [the Center for Multicultural Advancement and Student Success] has supported me throughout my undergraduate education and I wouldn’t be where I am without their support.” He spoke of the difficulty of feeling different. “[CMASS] gave me the awareness that there are people like me.”

And he isn’t done yet. As a member of the Commonwealth Honors College, he is still working on his senior thesis. He works in Dr. Courtney Babitt’s lab. The topic of his thesis is human brain evolution. “I am working on analyzing RNA-Sequence data to find long non-coding RNAs that might play a role in differences in human brain compared to chimpanzee.”

Heang-Lee left with a final piece of inspiration for his younger peers. He cautioned that, “yes, it’s cliché but it is true.” He stressed that he wouldn’t be offering this advice if it had not helped him.

“Believe that you can do it and you will.”