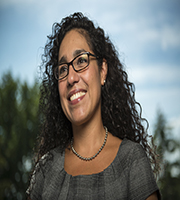 Growing up in Los Angeles, CA, University of Massachusetts Amherst communication professor Mari Castañeda, Ph.D. has been immersed in the  culture of the media her entire life. She recalls her elementary and high school classes being taken to Hollywood lots to fundraise for the school  by being members of a studio audience for sitcoms.

“I grew up seeing the construction of media that was taking place, but of course as a child you assume everything in the media is true and you don’t question it,” said Castañeda. Seeing the behind-the-scenes of Hollywood production, “made me realize how incredibly fabricated it is and how constructed the media is – even down to the laugh of the audience.”

Beginning to understanding the ways the media is constructed made Castañeda interested in learning more about the media popular culture as tools for communicating particular ideas, messages, and ways of seeing the world. In addition, she began to pay attention to what was not being represented in the media, noticing a lack of diversity in representation of people and ideas.

Originally, Castañeda wanted to work in media production. “I wanted to be the person who was going to be in charge of helping shape these cultural products and the ways in which they were organized,” she said. She later decided to study and research the media rather than produce media products, earning her B.A. in communication from the University of California, Los Angeles and her Ph.D. in communication from the University of California, San Diego.

Much of Castañeda’s research is social justice-oriented with the goal of making an intervention in the way people see and understand communication and the media.“Media, popular culture and telecommunications are social forces that really impact the way we engage in the world. They are not vacuous things that exist outside, but are very much a part of our everyday interactions and existence,” she said.

Castañeda spoke about this in Miami in December, where she was invited by the Smithsonian Institute to speak about U.S.-Latino popular culture.“The people that were there …were also cultural producers working at a national and local level, educators, community members and elected officials. That diverse range of people was a great opportunity to talk about the contributions of U.S./Latino culture and engage with folks who are cultural producers who may take this into account while they are producing cultural products. I feel like my research has the potential to speak to a variety of different audiences,” she said.

As a professor, Castañeda loves engaging with students, helping them come to a critical understanding about issues in the media and apply these critical perspectives to their own work in the future, regardless of their career field.  “Having the opportunity to work so closely with students is very fulfilling,” said Castañeda, who recently received an email from a student she taught five years ago, who said she still encounters the concepts and theories she learned in Castaneda’s class every day. The student thanked Castañeda for giving her the tools to critically understand the media landscape. “I want my students to come away with the skillset and theoretical toolkit to make sense of the world. That ability influences their engagement with other people: it’s the ripple effect that you’re hoping will happen.”

As a first generation college student and first generation professor, Castañeda said her family background motivates her to be a better teacher, researcher, and colleague.“My family background motivates me and encourages me,” she said. “My background keeps me … focused and centered.” Castañeda is still deeply connected to her roots in LA, visiting home every six months. Visiting the neighborhoods she grew up in also helps her in the social justice aspect of her work.

“As a Chicana from the west coast, my ethnic and family background has been important because they give me the motivation and resiliency to do the work that I do, and to feel like I can do it and that I deserve to be here as a professor.”For a person of color, feeling like a deserving member of a campus community can be a challenge when there are so few people who look like you. In addition to diversifying higher education, on the individual level it is important not to ascribe to harmful stereotyping about who is educated and who is not.

“So many communities of color have been historically put down for stereotypes of not having the ability to participate in higher education or become scholars or researchers. I feel that myself and lots of other colleagues really disrupt those notions with the work that we do, the way we engage with students, and by staying connected to the communities we come from,” Castañeda said.

When Castañeda was in graduate school, one professor told her that he was very concerned with her ability to be successful in the doctoral program because she visited her family in LA so frequently. “His perception was that I needed to dedicate my whole life only to the scholarly endeavor, but the thing that he didn’t realize is that it was going to Los Angeles and being connected to my family and my cultural roots that gave me the strength to do the things that I needed to do. They gave me the family love and support that I needed to be successful.”

For Castañeda, success is feeling good about the work that you’re doing and the contributions you’re making in the world. “You’re waking up everyday with an excitement about living your life as fully and as thoroughly as possible, engaging with the world and other people. That for me is success,” she said.

If she could give her younger self any piece of advice it would be to “travel more and worry less,” she said. “In the end it all kind of works out. If you love what you do and are committed to it and engage with it, things will fall into place.”