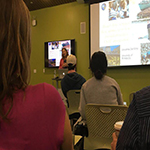 On Thursday,  November 10, both faculty and students of the University of Massachusetts Amherst met in the Integrative Learning Center to listen to Giovanna Dell’Orto speak on the refugee crisis. Dell’Orto is an associate professor in the School of Journalism and Mass Communication at the University of Minnesota. She is a former reporter of the Associated Press where she specialized in border and migration coverage in the United States. “I’m an immigrant myself. I was born in Italy and I was lucky enough to have the opportunity, the chance to make my home in the United States of America.” As of a year and a half ago, Dell'Orto became a naturalized citizen.

She began her presentation, title "Illegals Here, Refugees There, Crisis Everywhere: Journalism Tackles US/EU immigration”, by warning the audience. “I should tell you that we are going to be talking about topics that, I hope, trouble you.” She cited some facts. The United States has the largest proportion of migrants worldwide. Contrary to the laws of many countries, if a person is born in the United States, they are a United States citizen. This is regardless of the citizenship of the parents. “If you’re not born here, your options narrow very fast.” Green cards are available for potential immigrants but under two conditions.

A green card can be attained if a migrant has a family member with citizenship in the United States or if they have an employer who argues that the migrant is a necessity for the business. Employers must explain that a migrant is not taking a job from an American. The job must also require a Bachelor’s degree, though the migrant does not need to actually have said degree.  Each fiscal year 140,000 immigrant visas are available for aliens who seek jobs. Alien, though drenched in negative connotations (a term that the government uses but that many undocumented people consider a dehumanizing slur), is simply a term that refers to a non-naturalized citizen. The current immigration system in the United States was implemented in 1965. Until 1965, according to Dell’Orto, 90% percent of immigrants were European and the remaining 10% represented the rest of the world. Today, this is entirely reversed.

Dell’Orto continued to speak about the human right to asylum and the Geneva Convention. The Geneva Convention defined the right of wartime prisoners; established rights for those wounded in war, and established protection for civilians in wartime. It states that a person “owing to well-founded fear of being persecuted for reasons of race, religion, nationality, membership of a particular social group or political opinion,” can apply for asylum in another country. A person seeking asylum must ask for a court date. Currently, there are 500,000 pending court dates for asylum in the United States. To explain the complications of this system, Dell’Orto played a clip from the movie, “The Terminal”, with Tom Hanks. The basic plot of the movie is that Tom Hank’s character finds himself stranded in the JFK airport after his country collapses while he sat on a plane to America. Upon arriving at JFK, he found his papers to be invalid as his country no longer existed. The clip that was played showed airport marshalls attempting to explain the idea of political asylum to Hank’s character.

Once a person makes their way through all these processes, depending on what form of immigration they apply for, they must take a test. “To become a US citizen, you have to prove that you know English. You also have to study 100 questions about the history of the US.” The test includes questions like, “What is the freedom of religion, what the ‘rule of law’ is,   and what are two rights of everyone living in the United States?”

The following statement is then iterated by all who pass the tests and are granted United States citizenship: “I hereby declare that I will support and defend the Constitution and laws of the United States of America against all enemies, foreign and domestic; that I will bear true faith and allegiance to the same.”

After finishing relaying the facts and steps behind immigration, Dell’Orto took a deep breath. “Can anything I just told you fit into 140 characters? No. And that is why it almost never makes the news.”The information provided, though summed up above, took about a half hour to explain and even then could have used more clarification. Immigration policies in the United States (and globally) are extremely complicated.

And this is why journalism matters, Dell’Orto explained. “Journalism constructs images of borders and migrants that help define the box within which the public and policymakers think--and can provide the chance to think outside of it.”

Dell’ Orto concluded by urging the audience to keep watching, researching, and looking up news about migration. “Our voices have never been heard more clearly by media executives.”