Members of the Pioneer Valley community and students from the Five Colleges met at Haigis Mall at the University of Massachusetts Amherst Saturday, Sept. 19 for the Walk for Justice. This rally was run to demonstrate solidarity and demand legislative changes in policies and practices within police law enforcement to work towards eliminating race-based policing and discrimina 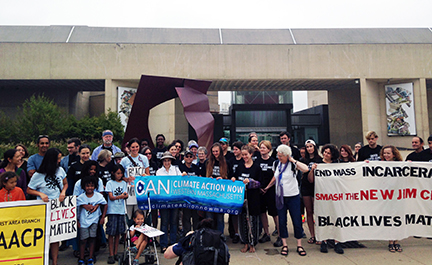 The event was organized by the Amherst chapter of the National Association for the Advancement of Colored People (NAACP) and co-sponsored by the Women of Color Leadership Network at the Center for Women and Community at UMass, the Center for Multicultural Advancement and Student Services (CMASS), UMass Black Student Union, and other UMass and local organizations.

The march began at Haigis Mall and continued through downtown Amherst and into Sweetser Park where participants chanted “black lives matter,” “no justice, no peace, no racist police,” and “money for schools and education, not for mass incarceration.” Every participant donned a shirt that read, “UMass Stands Against Racism.”

At Sweetser Park, refreshments were provided and people were given the opportunity to share their stories and experiences dealing with racism, discrimination and hate.

“It’s important for us to take action now to avoid a repeat of our history. We have to take consistent action. Even when it looks like nothing’s happening, [it’s important] that we take action,” said Kathleen Anderson, the president of the Amherst chapter of NAACP.

Dorothy Preswell of the First Congregational Church in Amherst reiterated Kathleen’s call to work together. “It’s very clear that the job is not done,” she said.

Dr. Barbara Love, a professor emeritus in the Social Thought and Political Economy program at UMass, asked the crowd to remember themselves as babies.

“That’s going to be harder for some of us here,” she joked. “We came into this world expecting a good world. Babies expect things to be right. No human being was born with beliefs that justify injustice, oppression, or racism. We know that we deserve a fair world and a just world.” 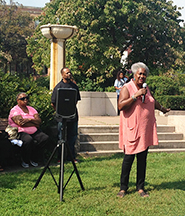 speech with a story:

“One day a particularly mischievous boy in a village came up with the perfect question that would stump an old woman in the village. He plotted a plan to hold a small live bird behind his back in his cupped hands. He would then ask the wise woman, ‘Is the bird in my hands alive, or is it dead?’ Naturally, if the woman said the bird was alive, the boy intended to quickly squeeze the life out of it and answer, ‘No, the bird is dead.’ If the woman said the bird is dead, then the boy would merely present the live bird, proving her wrong. Either way, the boy laughed thinking he couldn’t lose.

When he saw the woman, he stepped boldly in front of her, holding the small bird behind his back. ‘Wise woman,’ he challenged her with a smirk, ‘is the bird in my hand alive, or is it dead?’

The woman was no stranger to these types of challenges or these types of boys. She paused patiently before finally leaning over the boy in front of her until she met him on eye level.  That’s when she said, ‘Young man, the future of the bird – is in your hands.’”

She went on to say that our own future, as well as the future of the world, is in our hands.

Comfort Kalu, a sophomore political science major at UMass, said, “I felt good [after attending] and I feel like this is a good way to bring awareness to the people. It provides a way for the community to come together and stand against racism.”

Anika Fenton, a junior political science and STPEC major, said, “I feel really great. It was empowering to stand up for what’s right in the face of negativity. I was part of the protest in Northampton after Trayvon Martin’s (trial) results came out. It was empowering and liberating and I wanted to experience those same feelings. Yes, all lives matter, but black lives matter, too. Justice for everybody.”