By Nicole Dotzenrod and Olivia Laramie

A Five College panel discussion on the future of Tibet without the Dalai Lama was held at the University of Massachusetts Amherst Commonwealth Honors College events hall on October 13. His Holiness, the 14th Dalai Lama, has stated that he may be the last Dalai Lama due to rising tensions between Tibet and their occupier, China. 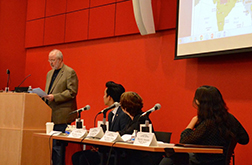 Tenzin Thargay, UMass sophomore political science and Chinese double major, planned the panel discussion in accordance with the Dalai Lama’s visit to UMass, which has been canceled due to the declining health of His Holiness. Thargay, a first-generation Tibetan-American, moderated the event.

The first speaker was David K. Schneider, associate professor of Chinese at UMass and former commercial officer for the U.S. Embassy in Beijing, China. Schneider provided an overview of the history of Chinese dynasties and their relationships with Tibet, which he said can be summarized by the following quote taken from the classic literary work by Luo Guanzhong, Romance of the Three Kingdoms: “The empire, long divided, must unite; long united, must divide. Thus it has ever been. This characterizes very well the history of Chinese interactions with its peripheral zones,” Schneider said. “The Chinese Western periphery is a politically unstable power vacuum. China’s strategic position in that region and its own political stability are intimately related. If China loses power in that region, the political stability of the Peoples Republic of China comes into question.”As a consequence of this, Schneider said, “It’s a geo-strategic imperative for any Chinese government to attempt to control that region as much as possible.” This means extending Chinese political and economic power over regions such as Tibet. According to Schneider, China is currently working to draw India into a position where it would have to choose between continued support for the exile community of Tibetans and its large interests with China, which include economic interests and protection. More than 150,000 Tibetan refugees have fled to India in the past 50 years.“This is the reality that will shape the road for Tibet ahead, in which Tibetans must think about,” Schneider said. He reiterated the importance for the U.S. government to remain engaged with that region.

Andrea Worden, director of government relations at the International Campaign for Tibet, spoke further about the role of the U.S. government in Chinese-Tibetan relationships. Worden said the U.S. plays an important role with Tibet as the only country where Tibetan policy is institutionalized through the Tibetan Policy Act.“Because of these institutional mechanisms there is space in Washington for action, dialogue, advocacy,” said Worden. “It is imperative for the U.S. government to protect Tibetan religion, rights, culture, and language as part of the Tibetan Policy Act.” There are currently two pending bills concerning Tibet: the Reciprocal Access to Tibet Act (Tibet is currently closed to citizens, journalists, and diplomats alike) and the Tibetan Refugee Assistance Act. For more information about these acts, visit congress.gov and search “Tibet.” Worden spoke about the importance of engaging with our elected officials to advocate for action in China and keeping the issues alive. “Right now there are too few ‘Tibet champions’ in congress – it’s up to all of us to cultivate more ‘Tibet champions’,” Worden said.

The next panelist, Lhadon Tethong, is the director of the Tibet Action Institute and former executive director of Students for a Free Tibet, and a notable figure in the Tibetan rights movement. Tethong spoke about the rise of a new generation of Tibetans who are resisting China’s hold. Until very recently, Tibet was cut off from the rest of the world. “We didn’t get to hear their voices or their thoughts directly because Tibet was essentially cut off,” said Lhadon about the new generation of Tibetans. “Tibet is a black hole of information. The Chinese control access to Tibet with such a tight fist.” Under this relentless pressure from China, the Tibetan youth continue to attempt to fight and advocate for rights and freedom using strategic and active nonviolence to right the wrongs in Tibet and push for change. Tethong described this new generation as a people “willing, ready and able to continue the struggle.”

One method of protest that Tibetans have desperately turned to under the pressure from China is self-immolation. At least 143 Tibetans since 2009 have lit their own bodies on fire in an act of protest against the Chinese occupation. There have been a reported 117 men and 26 women who have self-immolated, and  24 of these protestors have been under the age of 18. Of the total 143 self-immolators, 115 were confirmed dead.

“So many of the [self-immolators] who seem so extreme and desperate are quite hopeful…they are doing these actions to unite Tibetans, end the suffering of the Tibetan people and want to take control of their life and make the ultimate statement,” Tethong said. Tibetans have tried to seize ownership over anything they can. For example, Tibetans recently refused to celebrate Losar, the Tibetan New Year, to protest China’s occupation.“Tibetans will celebrate for weeks,” Tethong described Losar. “People get dressed up in their new, fine clothes and go home to home and it’s such a magical time.” When Tibetans, in mourning over the self-immolators, refused to celebrate, the Chinese government attempted to force the Tibetan people to celebrate; however, they refused to leave their homes. “They did not want to be a part of the propaganda that showed Tibet as normal, because it [isn’t] normal.”

Tethong said that nonviolent resistance in Tibet needs to grow, and that the issues must be kept alive. To those who see Tibet as a lost cause, she said:  “Tibetans have survived against all odds – even the most incredible state sponsored violence. All the resources that China has and has thrown at the Tibetans to force Tibetan loyalty and break Tibetan allegiance to His Holiness and they have not succeeded, and far from it. Tibetans pushed back, and a new generation who has never known freedom, never known an independent Tibet, is ready and willing to struggle and fight for Tibet in a nonviolent way...non-violent, strategic, cultural resistance needs to happen inside Tibet. The Tibetan issue is still alive today because of the handful of people trying to keep it alive.”

The final panelist was Dr. Jianli Yang, president of the Initiatives for China, advisor for Right to Nonviolence and former rising star in the Chinese Communist party. Yang joined the panel via Skype. “The Tibetan people have suffered so much at the hands of a Chinese communist regime,” Yang said. “I’m a Chinese and I feel guilty.” Yang believes that no Chinese person, either part of the PRC government or the opposition like himself, can or should claim to represent the will of the Tibetan people. He asserted that Tibet has not always been a part of China, despite what the PRC may claim. “The Tibetan people have a different biological, historical, and cultural identity,” he said. “The Chinese people as a whole must eventually accept this principle.”

The difficulty in this, according to Yang, is that Tibet and China are so deeply intertwined historically, culturally and politically.  He further added that "The Tibetan issue cannot be solved without the support of many Chinese, and the Dalai Lama is instrumental in uniting Chinese to the Tibetan cause. The number of Chinese who share my views, although small, are growing; however, there is no hope for a free Tibet if the nature of the Chinese regime does not change. “

In conclusion, Yang emphasized the importance for Tibetans to exert more effort to promote their culture. He said, “For political and economic reasons, the Tibetan youth are losing their language. If you lose your language you lose the hope to keep fighting. The Tibetan issue is a test of mankind’s morality”.  Yang, urging the audience to keep the issue alive, make their voices heard, and to make leaders feel morally obligated to act, “Do everything possible to keep the issue alive.