By Olivia Laramie and Nicole Dotzenrod

The Center for Multicultural Advancement and Student Success (CMASS) at the University of Massachusetts Amherst kicked off the semester with its fifth annual Cultural Connections event September 10, 6 p.m. in the Campus Center Auditorium. 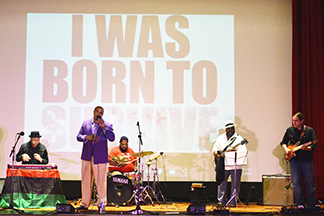 Both new and returning students filled the auditorium, where a variety of food was served and students were given the opportunity to mingle with staff from each cultural center on campus, as well as representatives from RSOs.

Students were welcomed to the event by Sam the Minuteman, and the event began with a video highlighting last year’s CMASS events, such as the Amazing Race, Stand Against Racism, and rallies against intolerance and oppression that occurred through the year at UMass.

“I was so pleased to see so many members of the UMass Amherst campus community come out on a rainy night. All of the performers were warmly welcomed and greatly appreciated by the audience, the food service and set-up was great, and the CMASS student staff and volunteers outdid themselves,” said Joyce White Deer-Vincent, associate director of cultural enrichment for CMASS.

“Thank you so much to everyone who pitched [in] – from generating contracts, marketing, organizing performers, organizing volunteers, arranging for card swipes, room set- up, food prep, running sound and AV equipment, taking pictures, conducting surveys and interviews, designing t-shirts and so much more, which made it a huge success,” she continued.

The headlining performance was Native American hip-hop and R&B artist Thundervoice Halfkenny, accompanied by his band. They performed a series of powerful songs about romance, culture, positivity, self-love and the ups and downs of success. Addressing the crowd he said, “It’s really important to know where you came from – know your roots.”

Jasmin Roberts then performed her spoken word poetry, covering topics such as racism and police brutality. Additional performance included Ilana Morris, a student jazz singer; a traditional Cape Verdean dance by CVSA; and a dance by AKA sorority to “Feelin’ Myself” by Beyonce.

“[I felt] empowered. This event supported pro-diversity and cultural inclusion. I loved the slam poetry,” said Karine Byamana, a communication major.  “I really enjoyed the variety of acts and the food was great,” said Derick Miller, an RD in Southwest.

During the event, CMASS staff conducted video interviews of attendees, asking “Why are you CMASS? An end-of-event survey asked students whether Cultural Connections helped them get the contact information of one to two people to support their student success this year. Ninety-three percent of respondents answered yes. Respondents answered that they plan to use many CMASS resources this year, from academic support to cultural centers, mentoring, career fairs, and volunteer opportunities. For 67% of respondents, it was their first time attending Cultural Connections.

“Cultural Connections has become our signature welcome event of the academic year. The success of this year’s event could not have been without the hard work and dedication demonstrated by the CMASS staff and volunteers. I am deeply grateful for having the opportunity to work with such committed and caring individuals. This year’s event was a great success as I saw many new faces and there were many connections made throughout the course of the evening,” said Oscar R. Collins, interim co-director of CMASS.

Brian Beaudoin, an RA in Mary Lyon and a junior kinesiology major said, “I see CMASS event advertisements all the time and I’ve always wanted to attend an event. I brought along my residents to show them all the culture on campus,” he said.

Natalie Nou, a sophomore biology major, said she intended to “try to get more and become more open and involved.”