Jeanne earned her B.S. in English Education in 1981 and M.S. in Student Personnel Administration in 1982 from SUNY Buffalo State College. Jeanne is a 1991 inductee of Buffalo State's Athletic Hall of Fame. Jeanne received her M.S. in Sport Management from UMass Amherst in 1991 and worked as a graduate assistant for Campus Recreation while earning her Master's degree. A former high school English teacher, coach and native of Buffalo and Western New York, Jeanne has been on staff since 1994. Jeanne is a former softball umpire and basketball official, having served as Hampshire/Franklin County Board 28's first female president & vice-president of the International  Association of Approved Basketball Officials. Jeanne is a first aid/CPR/AED instructor through the American Red Cross.

Jason received an M.S. in Exercise and Sport Sciences in 2005 from the University of Florida. At Florida, Jason was a graduate assistant in the Department of Recreational Sports and worked as a high school basketball and football official as a member of the Mid-Florida Officials Association. A UMass alum, Jason received his B.A. in Philosophy and worked in the Campus Recreation program as a sports supervisor and official. Prior to returning to his alma mater in 2006, Jason was the Coordinator of Intramural Sports at Missouri State University. Jason is a former Massachusetts high school basketball official and member of the International Association of Approved Basketball Officials.

Nick received his M.S. in Recreation and Sport Administration in 2014 from Western Kentucky University. At WKU, Nick was a graduate assistant in intramural sports and intern in club sports. A UMass alum, Nick received his B.S. in Sport Management in 2012 and worked in Campus Recreation as a sports supervisor and program assistant. Prior to returning to his alma mater in 2019, Nick worked at University of Connecticut Recreation from 2016-2018 as Coordinator for Intramurals & Tournaments, then as Assistant Program Director for IMs & Tournaments. Previous to UConn, Nick was Coordinator for Intramural Sports & Sport Clubs at Keene State University from 2014-2016. Nick is a basketball official with the International Association of Approved Basketball Officials and an NCAA Division III women's basketball official.

Brian returns to Campus Recreation after having served as Assistant Director for Leadership and Training with Student Engagement & Leadership from 2011-2019. Brian holds a B.S. in Business Administration from the University of Denver and a Master's in Recreational Sports Administration from Indiana University Bloomington. Brian came to Campus Recreation in 2009 as Assistant Director for Intramural Sports prior to moving to Student Activities and Involvement.

Zachary joined Campus Recreation in 2020. Zach graduated from York College of Pennsylvania in 2018 with an undergraduate degree in Criminal Justice with a focus on Intelligence Analysis. At YCP, Zach served as an intramural sports supervisor & coordinator. Zach completed his graduate studies in 2020 at the University of Las Vegas Nevada in Higher Education & Administration and served as a graduate assistant for Club Sports & Intramurals at UNLV's Student Recreation & Wellness Center.

Roger joined UMass Campus Recreation in 2009. Roger earned a B.B.A in Finance at Iowa State University and a Master of Arts in Leisure Management from the University of Mississippi. Roger's previous campus recreation experience includes Iowa State University as a facility supervisor, Ole Miss as a graduate assistant, Middle Tennessee State University as a facility coordinator and interim intramural & sport club director, and the University of Kansas as assistant director for facilities & membership services. In addition to his experience at the various universities, Roger served a nine-month internship with the NIRSA Foundation from November 1995 to July 1996. A lifetime member of the National Intramural-Recreational Sports Association (NIRSA), he served as Tennessee state director from March 2002-April 2004 and on the NIRSA Facility Management Committee from 2005-2007. Roger is a Certified Recreational Sports Specialist (CRSS) through NIRSA and certified basketball official in Hampshire/Franklin counties through the International Association of Approved Basketball Officials.

Larry graduated from Chicopee Comprehensive High School in Chicopee, MA in welding and metal fabrication. At UMass, Larry worked for Parking Services prior to coming to Campus Recreation in 2009. Larry's hobbies include restoring cars, woodworking and home maintenance.

Shawn graduated from Smith Vocational High School in metal fabrication and came to UMass in 2001. Shawn worked with Landscape Services and Custodial Services before coming to Campus Recreation in 2009. Shawn enjoys golf and exercising.

Jill is a UMass Amherst graduate with a B.A. with honors in Women's Studies with a concentration in community health. Prior to joining Campus Recreation in 2009, Jill was a manager, aerobics director and personal trainer at Ultimate Fitness in Hadley, MA and sales account executive at HRD Press, Inc. in Amherst, MA. Jill has competed in fitness and bodybuilding competitions. Jill holds several certifications, including Spinning® and yoga, and is a first aid/CPR/AED instructor through the American Red Cross.

Patty is a UMass alum with a B.S. in Physical Education & former UMass varsity field hockey coach. Patty was a member of the United States Olympic team, US Pan American team & US National Field Hockey team. Prior to joining Campus Recreation in 2009, Patty worked at Penn Monto, Inc. in Hadley, MA in customer relations, administrative operations, catalog production, marketing and website design. Patty maintains involvement with White Mountain Enterprises, Inc., where she assists in administrative components, including online services management & event marketing and programming. Patty was elected to the University of Massachusetts Athletics Hall of Fame in 2016. 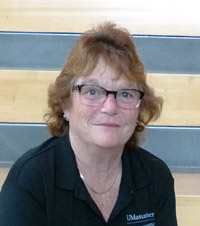 Lori joined Campus Recreation in 2014. Lori has worked at UMass in several departments since 1984, including Undergraduate Admissions and Residential Services. Lori received her associate's degree in Accounting at the University of Phoenix in 2007. Lori enjoys spending time with family and friends, as well as traveling and riding motorcycles.

Dave has worked at UMass as an office manager in several departments since 1986. Dave joined Campus Recreation in 1999. He received a B.A. in Economics at UMass in 1982 and a Master's degree in Public Administration from UMass in 1997. A United States soccer historian, Dave is the author of "An Overview of American Soccer History" and a contributing author of the book THE ENCYCLOPEDIA OF AMERICAN SOCCER HISTORY. An inveterate "trailblazer," Dave enjoys clearing and marking hiking trails in Western Massachusetts.