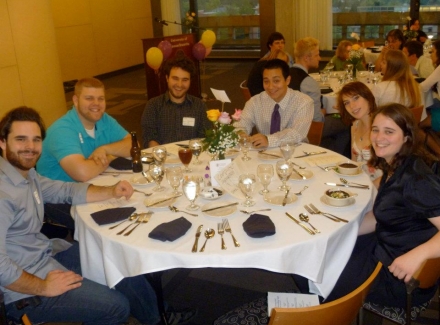 The BDIC Student Advisory Board held its 2nd Annual BDIC Alumni Networking Night at the Marriott Center on the 11th floor of the Campus Center.  The idea for the night is to get current BDIC students together with alumni in a social setting about how their BDIC degrees have transported into careers in the world at large. Each BDIC alum is stationed at a table and after dinner students circulate between the tables.  A jazz band provides suitable mood music.

• Cynthia M. Espinosa (BDIC 2010, concentration "Sustainable Food Management") Cynthia is currently working for Nuestras Raices, Inc. which described itself as "a grassroots organization that promotes cultural, economic, and community development in Holyoke, Massachusetts through projects relating to food, agriculture and the environment."  Cynthia's job title is "Record Keeping and Evaluation Assistant".  She also volunteers with [I'M] Nobody Productions, which describes iteself as "a group of people that firmly believes in the power of media to foster civic engagement and encourage unity in communities."  Cynthia's main passions are community education, food justice, sustainability and farming and how these topics can be combined to better people and their communities.

• Emily French (BDIC 2009, concentration "Sustainable Agriculture and Holistic Health") Emily grew up and lives at Sagatabscot Orchards in Sterling, MA. While completing her UMass degree Emily helped found the UMASS Student Farm.  After graduating, she worked with UMASS Agricultural Extension before joining the Mass. Farm to School Project, a grassroots organization that works to bring local food into school, college, and hospital cafeterias across the state. Emily also holds a degree in Clinical Herbalism from the Clearpath School of Herbal Medicine. She owns Sweetgrass Herbals, and grows, wildcrafts and processes plant medicines which she uses to create custom-blended herbal protocols for clients with a wide range of health issues. Local food and local medicine are her passions, and she's used her BDIC training to turn those passions into a lifestyle of doing what she loves.

• Max Grover (BDIC 2011, concentration "Aviation and Foreign Policy")  Directly following his departure from BDIC, Max began working as a corporate pilot for a major corporation in the Boston area. In addition to his duties traveling domestically and internationally, he has been tasked with keeping current on upcoming regulations and assisting with implementation of a safety management system. He has previously been employed by Marquis Jet Partners (now NetJets), East Coast Aero Club, and Smart Routes.

• Megan Kolb (BDIC 2009, concentration "Performing Arts Management") Associate Producer of Off-Broadway Theater.  Currently works at Gorgeous Entertainment for the non-profit organization, the All For One Theater Festival. Megan has also returned to The American Theatre Wing, the producers of Broadway’s TONY Awards for this 2012 spring/summer season as Production Manager for the SpringboardNYC program. In 2010, she was featured in The Wall Street Journal for her accomplishments with BDIC.  Megan also worked at the Edinburgh Fringe Festival in Scotland as the Front of House Assistant Manager overseeing 200 shows in 25 venues. She is a member of TRU (Theater Resources Unlimited) and hopes to join their producing mentorship program as an aspiring producer.

• Pete Merzbacher (BDIC 2011, concentration "Globalization and Entrepreneurship") Pete’s concentration was motivated by an intense curiosity about the globalized world we live in and the problems/opportunities it creates. From this broad curiosity, Pete focused his studies on the relationship between cities, globalization, sustainability and agriculture.  Pete is the Founder and Director of New Growth Gardens in Springfield, Massachusetts. Previously, he interned with small business development centers, a municipal economic development agency, and completed a year of AmeriCorps VISTA in Springfield.

• Christopher Messier (BDIC 2012, concentration "Computer Management and Music Entrepreneurship") Growing up down the road the road from campus in South Hadley, MA, Chris had an early exposure to UMass when he started working with the UMass Drumline at the age of thirteen through the "Marching Battery Technique" class. Once officially arriving in the Fall of 2008, however, he was undeclared and confused, overwhelmed by all the possibilities that didn't really match what he was looking for. By the Spring of 2010, Chris began his career in BDIC, working with his lifelong love of music and passion for creation through computer technology to not only create a strong major, but also prepare himself for the working world. Chris has been lucky enough to use his BDIC background in both his local band Moose and the High Tops and job at the UMass Library in the Systems Department.

More events to be posted soon!

What are our Alumni Doing Now?

Have you ever wondered what some of our alumni are up to today....

The BDIC office is located on the second floor of the Commonwealth Honors College Building, just one floor above the Roots Café. Come and visit our lovely new office in room 230.