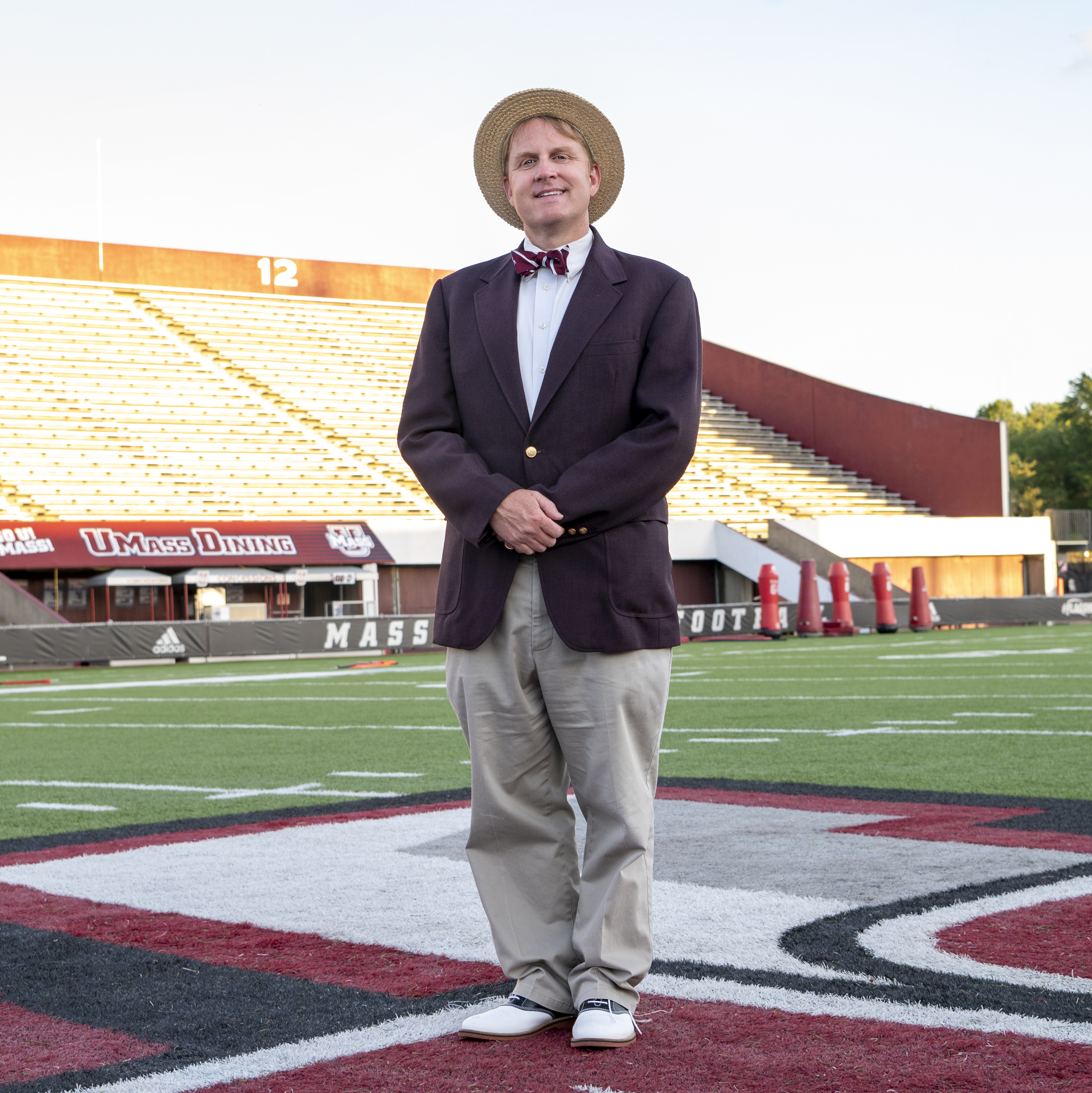 Timothy Todd Anderson has been at the University of Massachusetts Amherst since 2011. In addition to his marching band responsibilities, Dr. Anderson also directs the Pep Band, the Concert Band, teaches Marching Band Techniques and works with student teachers. During the summers, he is the conductor of the Amherst Community Band. Dr. Anderson previously served as the Associate Director of Bands at California State University, Fresno, from 2006 – 2011. He is a frequent clinician and guest conductor with school band programs throughout New England. Dr. Anderson holds the Bachelor of Music from the University of Iowa, the Master of Music in Wind Conducting from the University of Florida, and the Doctorate of Education in Music Education from the University of Illinois. His career began as an instrumental music teacher in the West Marshall Community School District of State Center, Iowa. Dr. Anderson resides in Amherst with his wife Jennifer and their cat Gatsby. He can be reached at tanderson@music.umass.edu.

Ian Hale received degrees in percussion performance from the University of Calgary and the University of Massachusetts Amherst where his teachers included Dr. Glenn Price, Eduardo Leandro, and DCI Hall of Fame member and past Associate Director Thom Hannum. Ian was a member of the music faculty at UMass from 2007-2008 and has served as a percussion instructor and clinician ever since. He was the Assistant Director of Bands for the Calgary Stampede Showband from 2009-2011 and has served as Percussion Director for Spirit Winter Percussion from Orleans, Massachusetts since 2012. Ian has worked with many national and international ensembles including the Calgary Stampede Showband, Spirit of America, Thomas Jefferson High School, Dartmouth Indoor Percussion, United Percussion, Boston University, University of Massachusetts, and the U.S. Army All-American Marching Band. He was a member of the percussion staff for the Madison Scouts, Carolina Crown, and the Cadets Drum and Bugle Corps. He is currently on the percussion staff for the Boston Crusaders Drum and Bugle Corps. He can be reached at ihale@umass.edu. 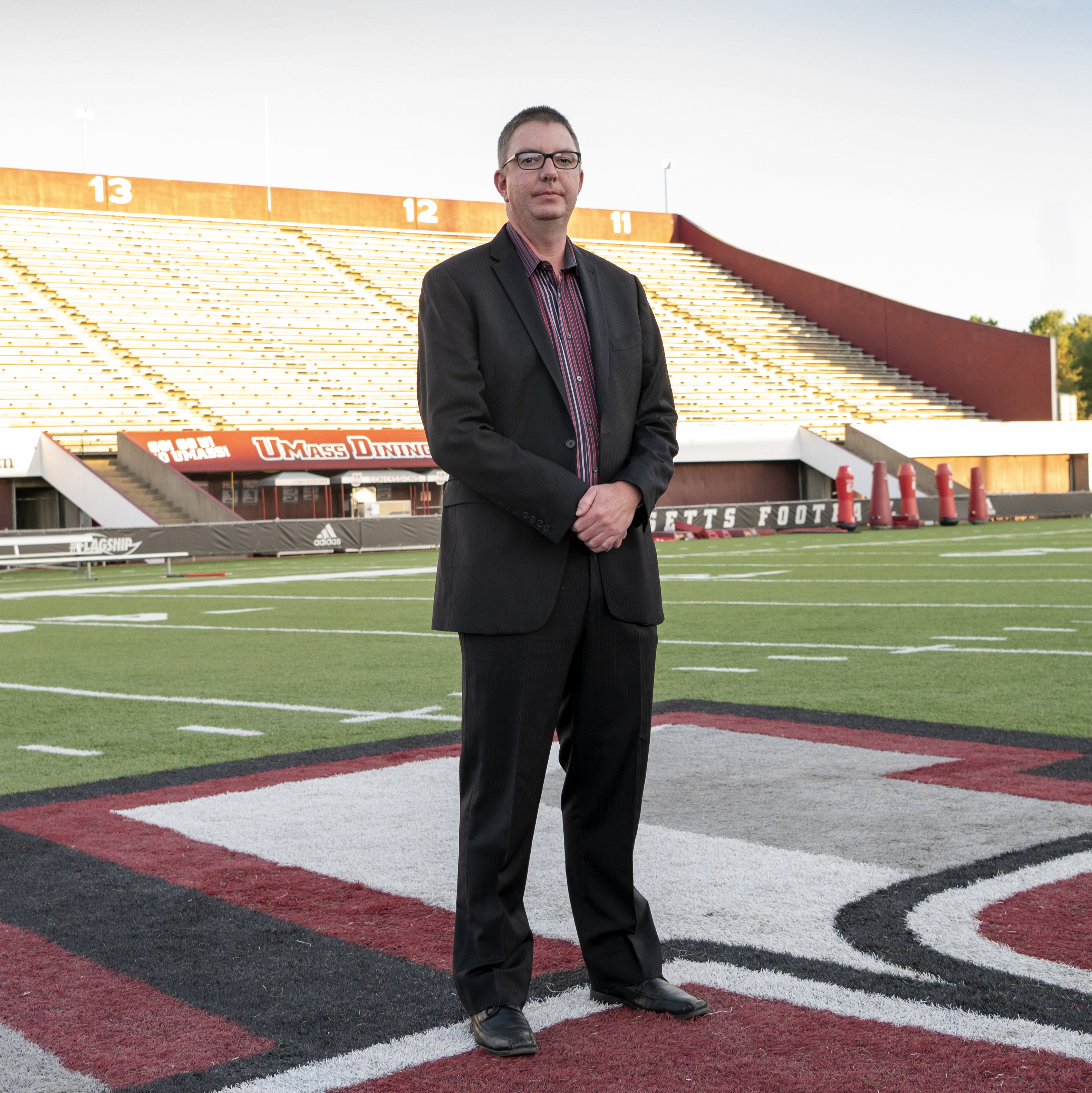 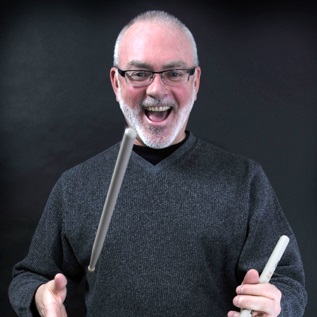 Thom Hannum has been teaching at the University of Massachusetts Amherst since 1984; he has served as the Associate Director of the Minuteman Marching Band as well as the Coordinator of the Marimba Band/Marimba Ensemble program. He received the Distinguished Service to the University Award, recognizing his considerable contributions to the University. Mr. Hannum has long been regarded as one of the nation's foremost percussion arrangers, instructors, and clinicians having presented numerous seminars and workshops throughout the United States, Canada, Europe, and Southeast Asia. Thom is also a charter member of the design team for the Tony Award-winning show Blast! He is known internationally for his work with the DCI World Champion Cadets of Bergen County and Star of Indiana. Mr. Hannum is currently the Percussion Coordinator and Arranger for the Carolina Crown. He can be reached at hannum@music.umass.edu.

Chris has been the Assistant Director of the UMass Marching Band, serving as Color Guard Director and Visual Coordinator, since 2015. She previously worked as Color Guard Instructor for the UMMB from 1990-1995. As a UMass student, Chris joined the UMMB in 1988, was color guard captain in 1989, and graduated in 1990 with a degree in Communications. Chris taught the Color Guard at the University of South Carolina where she earned Bachelor's and Master's degrees in Music Education, with a concentration in Early Childhood Music Development. She has taught early childhood music in California and Minnesota, and elementary general music classes in Virginia and Massachusetts. She moved back to Amherst in 2013 and happily resumed working with the UMass Guard. She lives in Amherst with her family, and teaches early childhood music classes in the area. She can be reached at csirard@umass.edu. 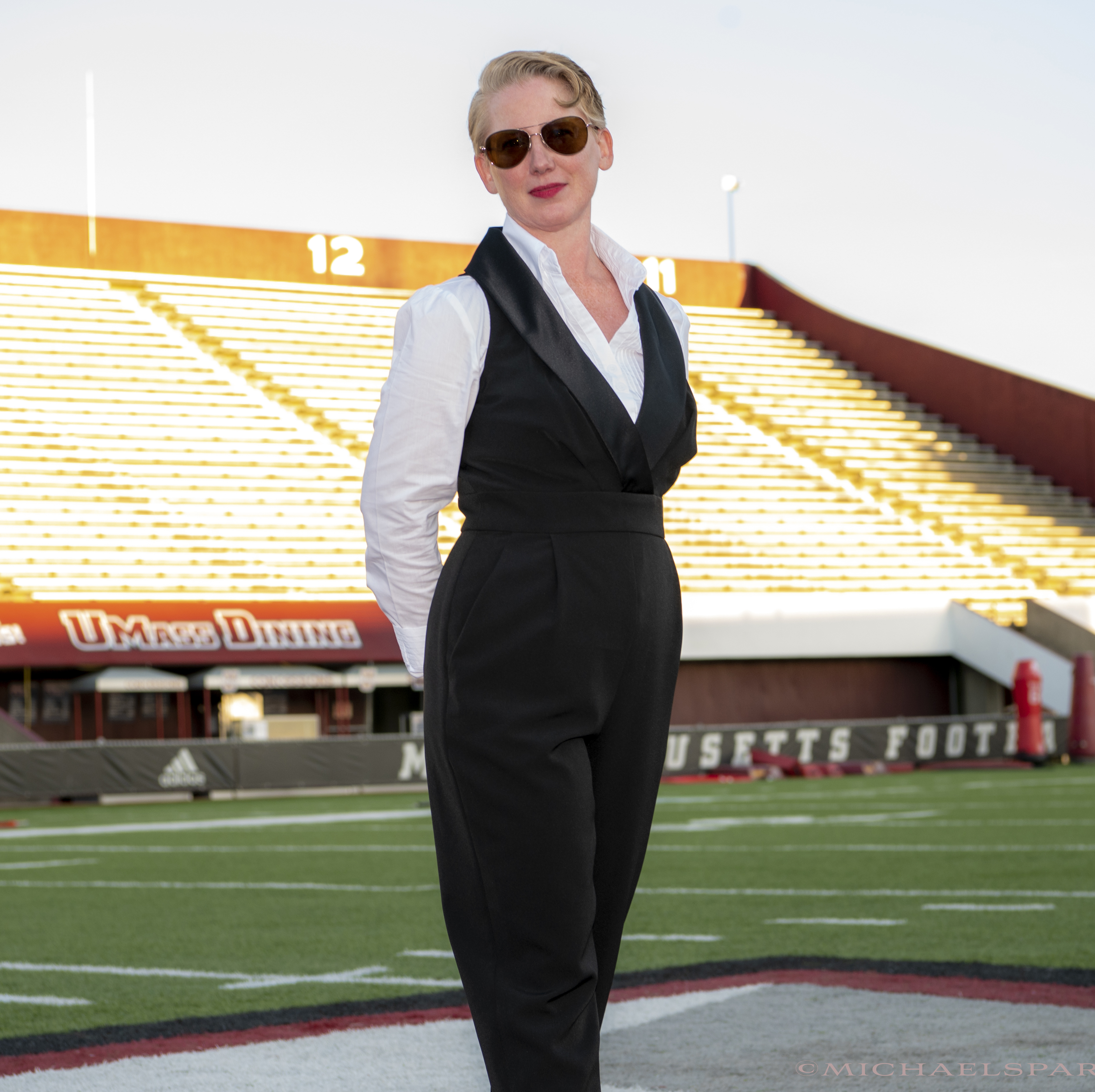 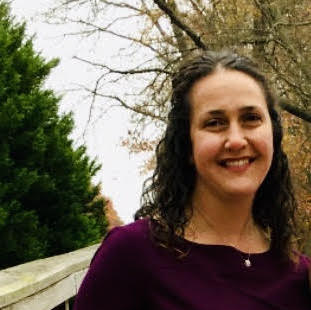 Eliza has been the Business Manager for the Minuteman Marching Band since 2016, having been with the University in other capacities since 2013. She loves the energy of the band, and she enjoys getting to know all the band members and to assist them in accomplishing their goals. Eliza is originally from Western Mass, and moved back after many years in Nashville. She now resides in Amherst with her family. She can be reached at e.frasier@umass.edu. 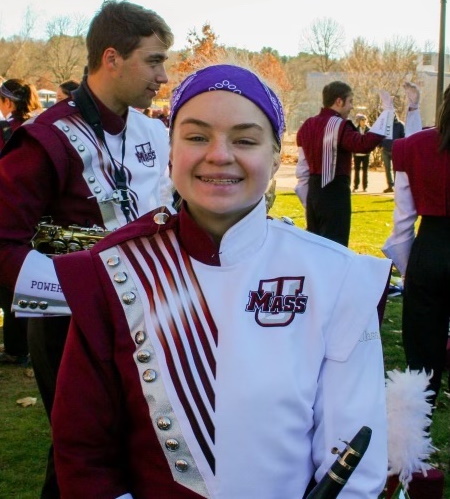 Grace Theberge is a Natural Resource Conservation major from Litchfield, New Hampshire. This is her fourth season in the UMMB as a member of the clarinet section. Grace has served on Library Staff for two seasons and is now the 2022 Band Manager. In her free time you can find her reading, spending time with family, or getting outside with her dog. A fun fact is that Grace had never been in a marching band before coming to UMass! Please reach out with any questions at manager.ummb@gmail.com.

Alessandra is a Public Health Sciences major from Swampscott, MA, and is also working toward her MPH in Epidemiology. She is a proud member of the Hogline (oink!) and was previously a member of the Publicity and Recruitment staff. She is so excited to be even more involved in the Ad Staff this year, and can’t wait to make her final season with the UMMB her best one yet! Outside of band, Alessandra loves cooking and baking. Feel free to reach out to her any time at ummbtravelmanager@gmail.com. 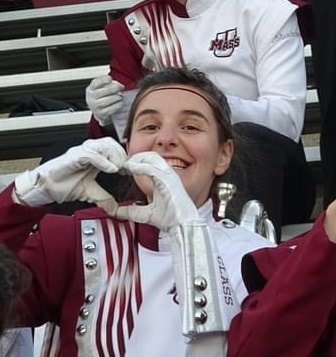 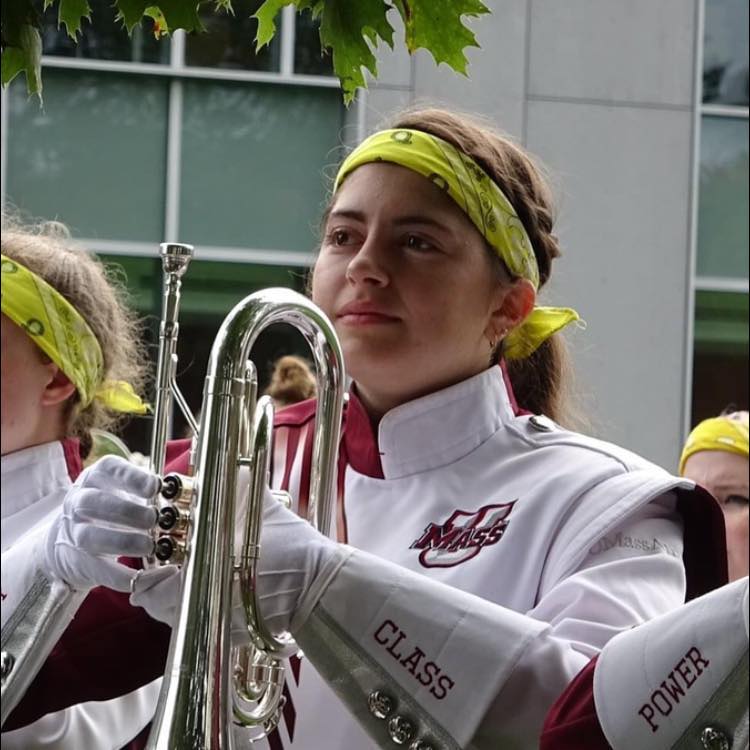 Laina is a Sociology major from Beverly Massachusetts. She plays mellophone (woo) in the UMMB and previously served on the Equipment Staff for two seasons, one as co-manager. Laina is also a proud member of Tau Beta Sigma and enjoys serving the band and music department. A fun fact about her is that she watched the UMMB march in the Macy's Thanksgiving Day Parade back in 2013! Please feel free to reach her at ummbpersonnelmanager@gmail.com.


The UMMB has many more student leaders that strive to make the band successful. 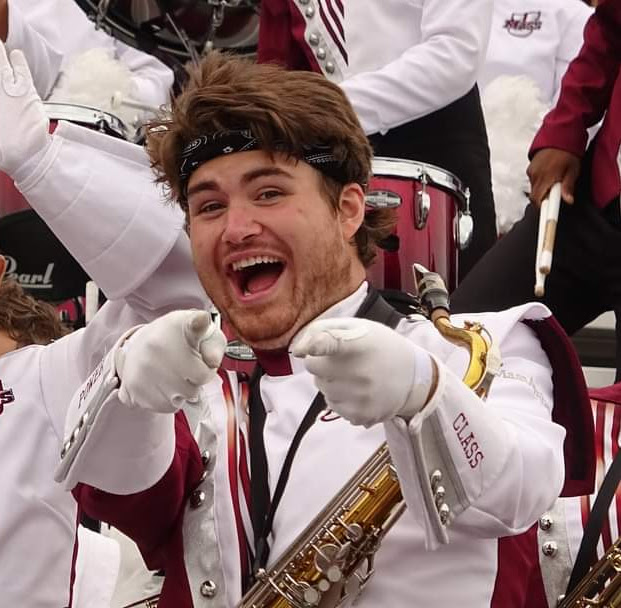 Patrick Kearns is a junior Public Health major from Bridgewater, MA. Coming from the tenor saxophone section (UH), this is his first year on the Drum Major team. This season, he is most excited to get to know everyone better, and to perform with an enthusiastic and talented group of people. Pat is also a member of Tau Beta Sigma, and loves serving the band and community. Outside of band, he spends his time by hanging with friends, jamming out to Sammy Rae, and driving the bus around town. Feel free to reach out at pkearns@umass.edu, he would love to chat!

Zoë Cohen is a Senior and third year Music Education Major from Nevada City, CA. You may be asking yourself, "why would someone come to UMass from California?" Well, as she will proudly tell you, she came for the UMMB! She joined us first as a member of our trumpet section (OINK) and this year she is returning to serve her third season as a Drum Major! She is proud to have had the opportunity to be a leader in the band through the pandemic, and is beyond thrilled to see this new chapter of the Minuteman Marching Band emerge. Zoë is an avid skier, animal lover, and proud plant mom. After UMass, she plans on pursuing a career in conducting and music leadership. She loves connecting with people so feel free to reach out at zpcohen@umass.edu. Life is pretty crazy these days, but nothing gets in the way of the music and Zoë cannot wait to have the time of her life with the best band anywhere this fall! 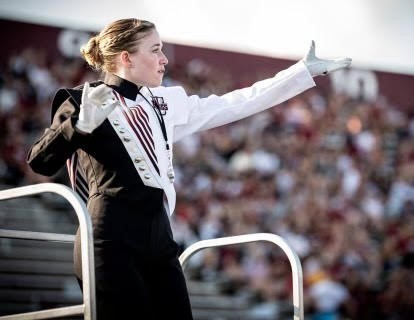 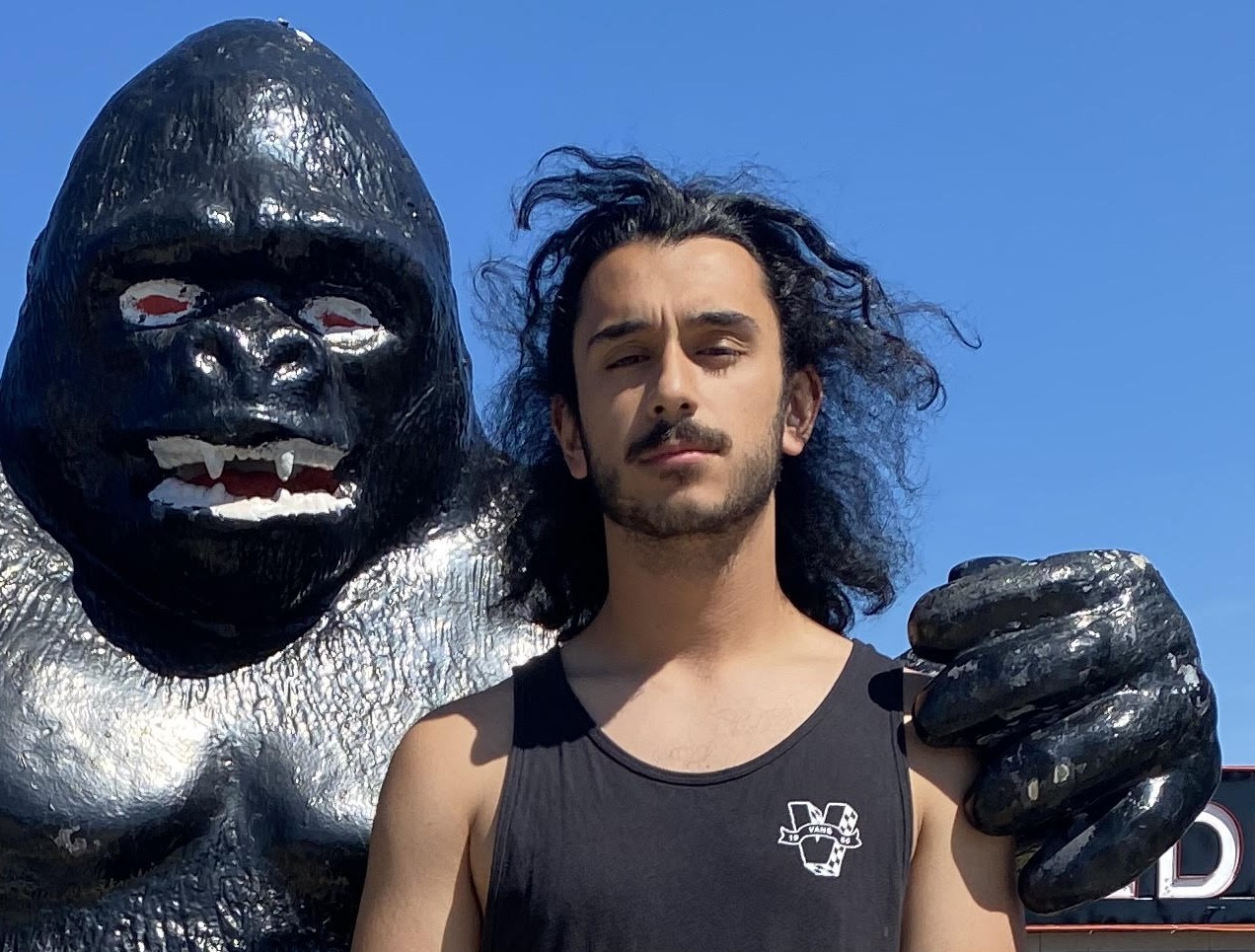 Daniel is a Senior Civil Engineering Major from Beverly, MA. He comes from the trombone section, and this will be his third year as Drum Major. While he's not conducting the band, you can find Daniel playing guitar and singing, or grinding schoolwork. His other interests include video games, rock climbing, skateboarding, and skiing. Daniel is also a Brother of the Epsilon Nu chapter of Kappa Kappa Psi, an honorary band fraternity. He’s also made Adam Sandler a smoothie. Daniels biggest goal is making the UMass band a place for everyone. Daniel loves meeting new people so feel free to reach out to him at dcuoco@umass.edu if you have any questions at all about our band!

Marielle Chrupcala is a sophomore music education major from Portsmouth, RI. Coming from the alto saxophone section, this will be Marielle’s first season on the team and she’s so proud to be part of the leadership for the Power and Class of New England! Going into this season, she’s most excited to make music with her fellow Minutemen and feel the great energy on game days! It is Marielle’s dream come true to be a drum major for such a spectacular band and she is so excited for an awesome season with the UMMB! 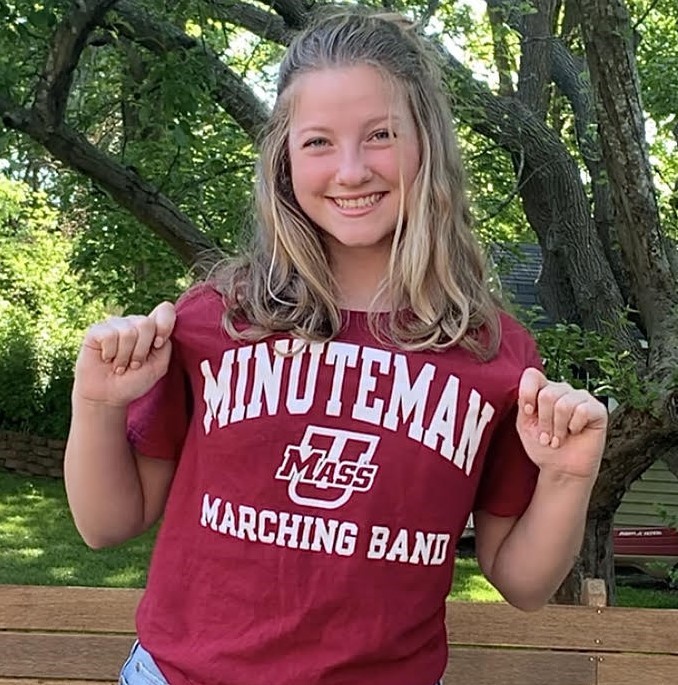 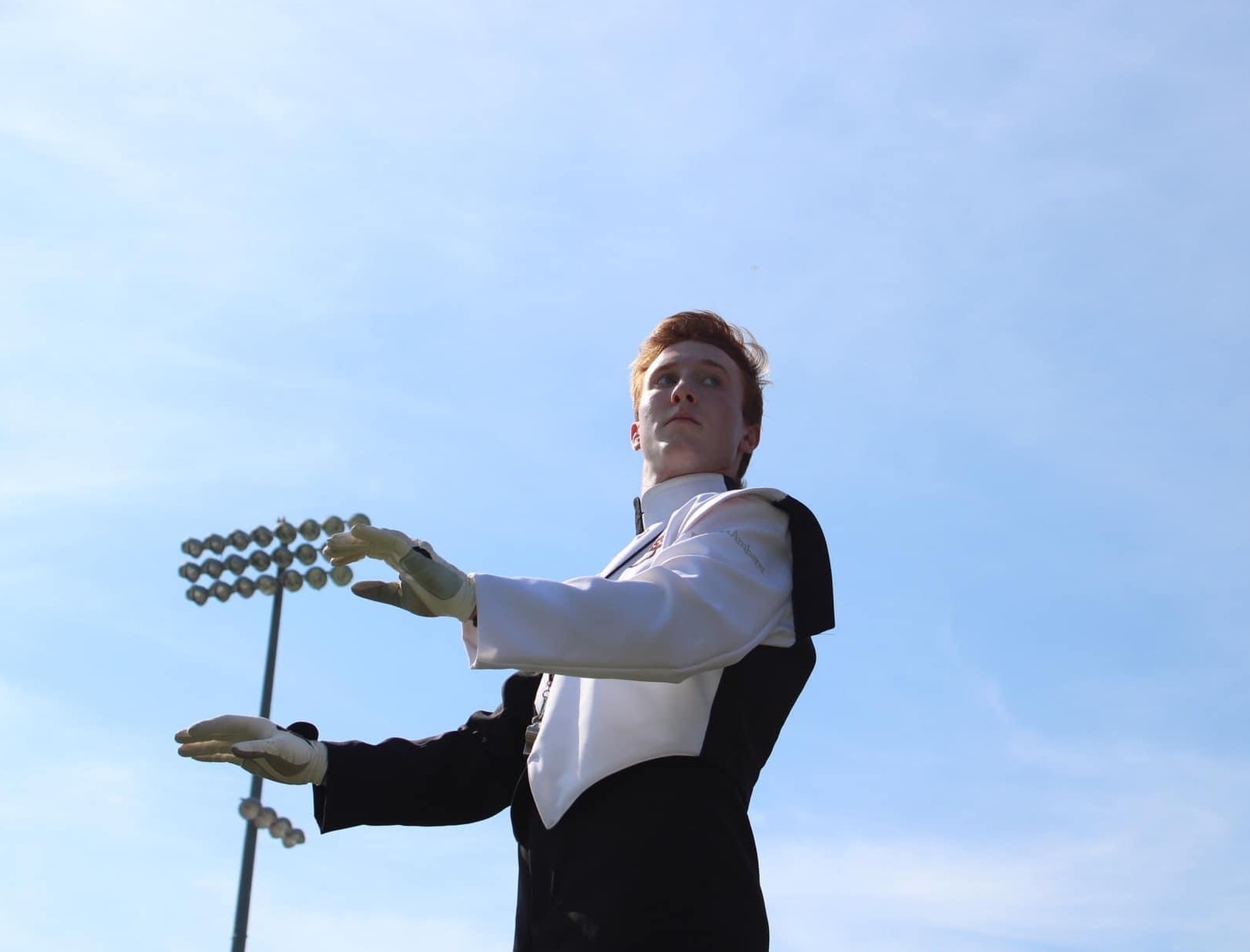 Jack is a senior Music Education major in the Trumpet Studio from North Attleboro, MA. Previously a member of the trumpet section, he was on Field Staff his sophomore year and this will be his second year as a Drum Major for the UMMB. Having served as a Drum Major during the first season coming out of the pandemic, he takes pride in having been a part of bringing the UMMB back to full force and cannot wait to see where this next season takes us! In his spare time, you can find Jack enjoying time with friends, spending time outside, and driving buses for UMass Transit. He knows how intimidating joining such a big band like this can be, so free to reach out to him about anything at jbainton@umass.edu!