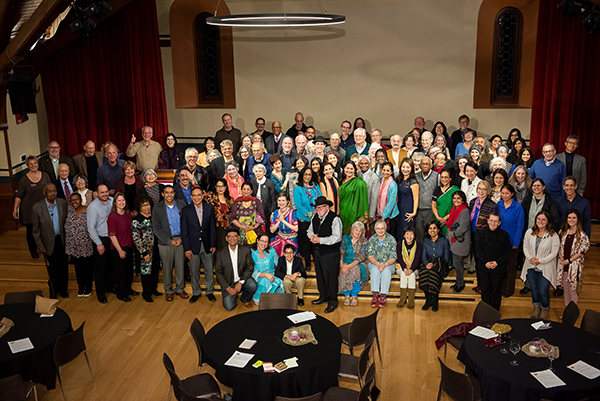 Ranjanaa Devi, Director for the Asian Arts and Culture Program retired on October 19, 2018. Her contributions to the University during her 35 years of service have been enormous and impactful. As the founder and director of the Asian Arts & Culture Program, Devi set the bar for artistic programming at the highest level presenting exemplary concerts of music and dance, creating innovative intersections and exchanges, presenting tours, films and special cultural events throughout her twenty-five year tenure. Thanks to her passion, today, the Asian Arts & Culture Program is firmly established, a credit to the University and fully supportive of its commitment to diversity.

1n 1993, Devi was invited to address the critical need for diverse arts programming at the Fine Arts Center and the Asian Arts & Culture was her inspired response. In its 25 years of programming, under Devi’s direction, the Asian Arts & Culture Program has given center stage to artistic endeavors that reflect many cultures of Asia, bringing to the region work that is often available only in such major metropolitan venues as New York and Los Angeles: Bunraku puppets, Noh theater, Butoh from Japan, Tibetan Sand Mandala, Cambodian Khmer dance, Classical  dance from India, Qawwali from Pakistan, Music from Afghanistan, Vietnam, Silk Road , Central Asian,  Middle East and so much more. In showcasing such an array of artists and art forms, Devi has not only enriched the cultural life of the area and given audiences many memorable experiences, but she has also fostered an appreciation and understanding of the rich cultural heritage and the contemporary influences of Asia.  This Program became a beacon of diversity on campus and a unique resource for students in the valley’s higher institutions.

Devi’s partnerships with colleagues at UMass and colleges as well as with Five College Inc. have resulted in enriched academic curriculums and unique opportunities for outreach to the community, through such offerings as artist’s residencies and workshops. Her on-going partnership with the Springfield Schools Chinese Language Program has meant that for the past 20 years thousands of K-12 students have been able to attend concerts and interact with the artists.

Devi has been the recipient of numerous prestigious awards and grants from foreign governments and national, regional, and state agencies including citations from the Massachusetts Senate. Notable institutions that she has received awards from include the Japan Society of Boston, two Citations from the Massachusetts Senate as well as grants funding from the Japan Foundation, Asian Cultural Council, The Japan Society of New York, Ministry of Culture Taiwan (Republic of China) in collaboration with Five Colleges Inc., National Dance Project, New England Foundation for the Arts, Community Foundation for Western Massachusetts, and the Association of Arts Presenters. She is proud to have been associated with the Massachusetts Cultural Council (MCC) since 1982 as a selected artist on its roster and as the Director of the Asian Arts & Culture Program.  In the latter capacity, she has secured MCC organizational grant awards every year for more than ten years. Devi has served as a panelist for MCC, New England Foundation for the Arts, Jacob’s Pillow and at the Association for Arts Presenter conference.  She is serves as a Trustee on the Board for the Center for Tibetan Buddhist Studies and Culture: Jampel Nyingpo Ling based in Amherst, MA

Since 1984, Devi has been an affiliated guest faculty at the Five College Dance department, teaching courses on Indian dance, ritual and history and has presented her work in the Five College Dance faculty concerts. In 2000, Devi designed the Alankar: Arts India, a travel abroad study course at the university leading five tours between 2001- 2011. She took students and community members to India to see and experience the arts and cultural heritage first hand.

Before working at the university, Ranjanaa was an internationally recognized dancer and the artistic director of her own dance company and the president of Nataraj Performing Arts of India a not-for-profit arts education organization located in western Massachusetts but with its roots in India.  She has received great acclaim for her many full length choreographic works, including Gita-Govinda, Devi, Chandalika, Pooja: The Nine Elements, in Praise of Tara and Mudra: The Gesture Speaks. These choreographic productions were inspired by Hindu, Buddhist and Asian ritual themes and united the performing arts with the fine arts and traditional forms with contemporary elements and staging. The Williams College Museum commissioned her to choreograph a work centered on the museum’s collection of Indian miniature paintings which led her to create RagaMala; Nine Emotions, a large scale theatrical production inspired by Sanskrit drama, martial art forms in India, classical and folk dance and spoken word.

She taught dance classes, held school residencies throughout New England and toured internationally performing in Canada, Australia, and India and was twice invited to Japan to perform with her dancers. She has written several articles on dance technique, Expression and Lyricism in Indian classical dance, Dance as meditation, and on the connection between Ritual and Dance.

Ranjanaa leaves a legacy of memorable performances and cultural events that speaks to the paramount importance of understanding the other half of the world’s cultures and what it means to be a global citizen.