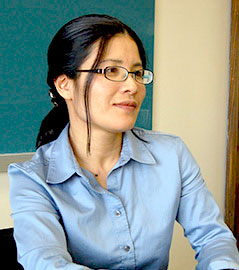 Reiko Sono is a senior lecturer who teaches courses in Japanese religions and Buddhism, as well as upper-level language courses. Her dissertation in progress at Princeton University explores the fluid worldview of elite samurai in seventeenth-century Japan through their gift-giving rituals. After more than a century of civil war, a new social system was emerging in which gift-giving rituals played a key role by replacing military exploits as the determiner of hierarchical positions. She holds M.A. degrees in religion from Princeton University and the University of Tsukuba, in Japan.

In her religion courses, Sono encourages her students to inquire into the dynamic relationship between religion and society. She starts with questioning conventional conceptions of religion based primarily on monotheistic western religions, and moves on to explore how religious traditions have influenced politics and economy and vice versa.

In her language courses, Sono strives to help her students become competent in communicating effectively in Japanese. She is an Innovative Teaching Fellow who participated in a yearlong workshop on Team-Based Learning, a type of student-centered teaching that has proven successful in various fields of study. In language courses, however, few instructors have applied this method because of constraints posed by students’ growing but limited language ability on the one hand and the wide variety of elements that need to be covered in class on the other. Nevertheless, Sono sees great potential in TBL for second language instruction. Team discussions provide ample opportunities for students to practice the language, and consulting each other about grammar fosters linguistic competency. With her TBL training, Sono continues to develop effective ways to apply this teaching style in language courses.

Sono also serves as one of the undergraduate advisors for Japanese majors. Besides regular advising, she organizes the Asian Languages and Literatures Career Night and other job-related events and workshops, as well as the annual ALL Student Conference in the Spring.