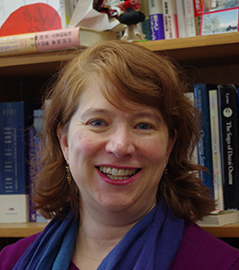 Amanda Seaman received her BA in East Asian Studies and Psychology from Wellesley College. After a year in Toyama Japan on the JET Program, she spent three years working for Fujisankei Communications International, doing advertising and product development for their Nintendo games division. She received her MA and PhD in East Asian Languages and Civilizations from the University of Chicago in 2001.

In 2003, she joined the faculty of Asian Languages and Literatures at UMass. She was the recipient of a Japan Society for the Promotion of Science research grant in 2007-2008, leading to the publication of her second book, Writing Pregnancy in Low-Fertility Japan (University of Hawai'i Press, 2017). Professor Seaman is a member of the Five College Steering Committee on Culture, Health and Science; her current research concerns representations of illness and affliction in contemporary Japanese literature, diaristic writing, manga, and film.

“The Ties that Bind: Pregnancy and the Persistence of Tradition in Contemporary Japan,” in Journal of Asian Medicine 5 (2009): 39-56.

Japanese 497A: Readings in Modern Japanese I

Japanese 391/591: Tokyo through Literature and Film