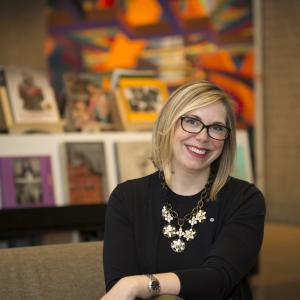 Tiffany Sprague ‘97 is the Director of Publications and Editorial Services at Yale University Art Gallery in New Haven.

Upon graduation from UMass Amherst with her BA in Art History in 1997, Tiffany held two museum positions: Conservation Research Assistant at Smith College Museum of Art in 1997, and the Lillian Butler Davery Resident Intern at the Bruce Museum of Arts and Science in Greenwich, Connecticut, from 1998 to 1999. After that, she went to New York City to get her MA at the Institute of Fine Arts, graduating in 2001. It was at that time that she began to work as an editorial and research assistant at the Metropolitan Museum of Art. After 2001, she worked in the Department of European Paintings as a research assistant and in the Department of Medieval Art as a research associate, while holding various freelance editing jobs.

Tiffany Moved to New Haven in 2005 and launched the editorial department at the Yale University Art Gallery, building it from the ground up. Her editorial work involves overseeing art historical publications, such as A Modern World: American Design from the Yale University Art Gallery, 1920–1950; Get There First, Decide Promptly: The Richard Brown Baker Collection of Postwar Art; John La Farge’s Second Paradise: Voyages in the South Seas, 1890–1891; Picasso and the Allure of Language; Tea Culture of Japan; and Stuart Davis: A Catalogue Raisonné, which won the Wittenborn Award in 2008. Tiffany also planned and executed all interpretive materials for the reinstallation of the Gallery’s three buildings, which were reopened in December 2012. She formed and continues to chair the Gallery’s Interpretation Committee, and also manages the museum’s website.