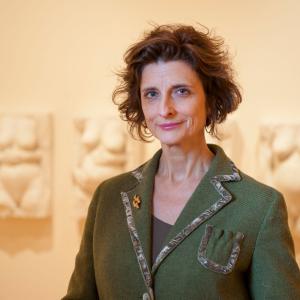 I was a dropout from Mount Holyoke College, earning $1.90 an hour at Living and Learning Day Care when I started taking art history classes part time at UMass.  My year as a pre-med student in South Hadley had not gone well.  I had been out of school for nearly three years, and I felt very rusty.

When I enrolled in that first class with Walter Denny, I was welcomed without hesitation and offered the kind of fellowship that I had been missing. One course led to two, then to four, and eventually to my senior thesis on Degas and Toulouse-Lautrec under Anne Mochon.  The very kind but rigorous criticism I received from her set a standard for my scholarly writing since.  An internship at the Boston Museum of Fine Arts, secured with the help of Iris Cheney and Walter Denny, led to a job there in the Education Department, which in turn led to a position as a curator at MIT’s Hayden gallery (now the List Visual Arts Center).  My last year there I organized an exhibition called Intimate Architecture: Contemporary Clothing Design (with Robert Mapplethorpe contributing original photographs for the catalogue), which turns out to have been the first “white cube” exhibition of fashion.

My UMass training got me into the Ph.D. program at the University of Pennsylvania, where I studied with Leo Steinberg and John McCoubrey.  After postdoctoral fellowships from Columbia’s Society of Fellows and the Getty Foundation, I began teaching full time at Penn in 1994. My first book, Body, Place and Self in 19th Century Painting was published in 2000. I taught at Penn full time for eleven years, and then in 2005 came to Rutgers University, where I’ve done a fair amount of administration, and co-founded a working group on the Medical Humanities. (The pre-med training wasn’t entirely in vain!) Cézanne’s Other: the Portraits of Hortense was published in 2009, and won the Motherwell Prize from the Dedalus Foundation. I’m currently working on a series of essays about 19th century medical photography and a book about John Singer Sargent called “Skins”, for which I won a Guggenheim in 2014.

I have never doubted that none of this would have happened had I not overcome my trepidation and crossed the threshold into the classroom at UMass.  I’ve had many students since my undergraduate days, and now have a far more realistic sense of how much patience and flexibility good mentorship demands. This makes me all the more grateful to my first art history professors, who restored my confidence and gave me the gift of first-rate intellectual training.  (I should add that I met my husband at UMass.) Although I loved being at Penn, it’s at Rutgers that I feel truly at home, in part because it resonates so deeply with the diversity, energy, and acceptance that I found at UMass.