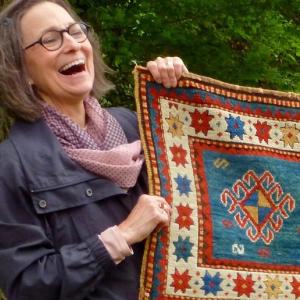 As a Cornell undergraduate, I had never taken an art-history course, in the belief that any instruction delivered in a dark room was just an invitation to doze. But after hearing Walter Denny lecture about oriental carpets, I decided that studying Islamic art history might keep me awake after all, and maybe, down the road, lead to something more mentally challenging than the rug dealing by which my husband and I were then making ends meet.

I now cannot walk into a museum anywhere without thinking of, and feeling humbly indebted to, beloved professors—Iris Cheney, Mark Roskill, Craig Harbison (all three now gone), and Kris Haney—who taught the “non-Islamic” courses I took, at first grudgingly and then enthusiastically, on the way to my UMass degree. Walter indeed introduced me to Islamic art, allowing me to understand carpets in their wider cultural and artistic contexts. (What luck!—I didn’t realize then how rarely rugs, or textiles in general, received any academic notice whatsoever.)

Thus grounded in art history, I got into the PhD program at Harvard. Despite the initial chilly shock of the place, I spent decades there: as grad student, assistant curator in the Islamic and Later Indian Art Department of the Sackler Museum (now part of Harvard Art Museums), and finally, before my retirement, as managing editor of Muqarnas: An Annual on the Visual Cultures of the Islamic World, published through Harvard’s Aga Khan Program. Between the latter two gigs I crossed the Charles to the Museum of Fine Arts, Boston, where I worked as assistant curator in the Asian and Textile departments. The greatest reward of being at the MFA was mounting shows, including, in 1999, Ambassadors from the East: Oriental Carpets in the MFA and, in 2001, Poetry of the Loom: Persian Textiles in the MFA. In addition, in 2003 one of my Harvard grad-school colleagues, who was now at the Sackler/Freer Gallery, Washington, enticed me to guest-curate The World at Our Feet: A Selection of Carpets from the Corcoran Gallery of Art.

Although I’m more comfortable editing other people’s words than writing my own, over the years I managed to co-author the exhibition catalogue Through the Collector’s Eye: Oriental Rugs from New England Collections and publish numerous articles and reviews in HALI: The International Journal of Oriental Carpets and Textiles. Since retiring I’ve served as co-chair of the New England Rug Society, whose newsletter I edit and produce. And I’m still guest-editing articles for Muqarnas, on the theory that I’m simultaneously providing relief for the current editor, exercising my aging brain, and keeping up with an expanding field: now the journal even includes the occasional young scholar’s essay on oriental carpets.