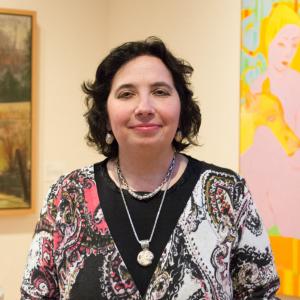 Heather Haskell is Vice President and the Director of the Art Museums at the Springfield Museums in Springfield, Massachusetts. She oversees operations and collections in the five cohort museums: the George Walter Vincent Smith Art Museum, the Springfield Science Museum, the Michele and Donald D’Amour Museum of Fine Arts, the Lyman and Merrie Wood Museum of Springfield History, and The Amazing World of Dr. Seuss.

Haskell studied American and European art at UMass, but also pursued an interest in Asian art and culture. After graduation, she traveled to China to study and to teach English to college students. This formative experience allowed her to visit important archeological and art historical sites, and solidified her interest in Chinese art.

After returning to the United States, Haskell embarked on a career at the Springfield Museums. Inspired by the excellent American, Chinese and Japanese holdings, Haskell began her career as Assistant Registrar. In the years following, she worked in the Collections and Curatorial Departments of the Art Museums, taking the position of Director in 1998. She was named Vice President of the Museums in 2016. Haskell’s expertise and dedication have resulted in numerous engaging exhibitions, additions to the collection, and a push to reinvigorate object interpretation by adding written, audio and visual didactics to displays throughout the museums.