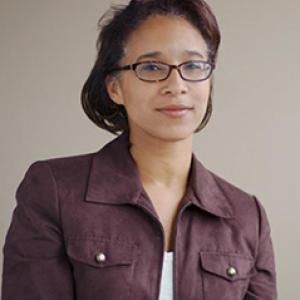 Professor Higginbotham presented a keynote address on the representation of black urban labor by American realist painters of the 1930s during the 15th Mark Roskill Graduate Symposium: In the City: Identity and Urban Spaces. The symposium was hosted by the MA candidates in the Department of the History of Art and Architecture at the University of Massachusetts Amherst in 2014.

Professor Carmenita Higginbotham’s research examines early 20th century American art with an emphasis on how notions of "the city" have had an impact on representation. Her book, The Urban Scene: Race, Reginald March and American Art (Penn State University Press, 2015), considers how Reginald Marsh as an American Scene artist represents African Americans during the 1930s. The Urban Scene situates the language of racial representation within urban contexts invested in the legibility of New York’s landscape and responding to a growing interracialism in popular public spaces.

Professor Higginbotham joined the faculty of the University of Virginia in 2005. She teaches both undergraduate and graduate courses on such topics as  American Art, Popular Culture, African American art,  Art Film, 1930s: Poverty, Politics and American Art, and Problems in American Art: The City. She is currently the Director of Undergraduate Programs in the Program of American Studies.