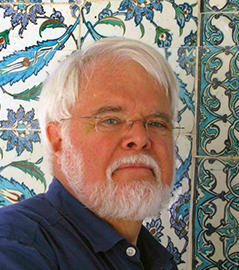 Walter B. Denny joined the faculty of the UM/A Art History Program in 1970. He did undergraduate work at Robert College (Istanbul), Grinnell College, the State University of Iowa, and received his BA cum laude from Oberlin College in 1964.  After graduate study at Harvard University and Istanbul Technical University on a Fulbright Fellowship, he received his PhD in Fine Arts from Harvard in 1971. His primary field of teaching and research is the art and architecture of the Islamic world, in particular the artistic traditions of the Ottoman Turks, Islamic carpets and textiles, Islamic imagery in European art, and issues of economics and patronage in Islamic art. Current projects include catalogues for two major collections of Islamic art, a monograph on the history of Islamic carpets, and a number of articles on Ottoman art and orientalism. His chapter on Islamic art in the 7th edition of Janson's History of Art appeared in early 2006. He is an active photographer, and scans of about 13,000 of his color slides of Islamic art are available through ArtStor, a project originally part of of the Mellon Foundation.  His new digital archive of high-resolution images of art and architecture in many different geographical and chronological areas, started in 2008, now numbers over one hundred thousand images, much of which is available through the UMass LUNA digital archive and the Digital Scholarship Center in the Du Bois Library.

In addition to teaching a two-semester survey sequence on Islamic art and architecture, usually offered in the fall semester, Walter has taught a large undergraduate topical survey course, Visual Art, Artists and Cultures, almost every fall for five decades. His upper-level courses have focused on various aspects of Islamic and European art, including an historical survey of the art of the oriental carpet in east and west, and a course on a thousand years of orientalism in Western art. He has also taught the Graduate Museum Studies Seminar for several decades, as well as a one-credit graduate course entitled Images and Reproductions in the History of Art, a course that examines both the history of use of images in the discipline, and the practical problems of obtaining images for one's scholarly work, including issues of copyright, photography of art, electronic media, and permissions to publish. He has also taught a survey course on History of the Decorative Arts.

Walter has served as a Trustee of The Textile Museum (Washington) and was for three decades Honorary Curator of Carpets and Textiles at the Harvard University Art Museums in Cambridge. He served as Senior Scholar in Residence in the Department of Islamic Art at the Metropolitan Museum of Art from 2007 to 2017, contributing to the completion of the Museum's new galleries of the arts of Arab Lands, Turkey, Iran, Central Asia and later South Asia. He presently chairs the Visiting Committee of the Department of Textile Conservation at the Met. He was a long-time member of the Board of Governors of the Institute of Turkish Studies (Washington DC) and serves as Charles Grant Ellis Research Fellow in Oriental Carpets at The Textile Museum. He is active as a lecturer in the United States and overseas, and as a consultant to museums and other institutions in the United States and abroad. He has served on graduate and doctoral degrees committees at, among others, the Courtauld Institute of Art (London), the Institute of Fine Arts of New York University, the Université de Montreal, the École du Louvre (Paris), the Faculty of Islamic Studies, University of Sarajevo (Bosnia), and Oxford University.

Walter is married to Alice Robbins, a professional musician (Baroque cello and viola da gamba) who is also an instructor in the Five College Early Music Program, and is the father of Matthew Denny, born in 1988. Walter performed actively until 2008 as a tenor soloist and chorister with various early music ensembles in New England, and serves actively on the Board of Directors of Arcadia Players. His continually updated website is found at www.wbdenny.com.

Walter Denny plans to retire after completing his 53rd year at the University in the spring of 2023.  He will continue to support the Department and its students, and may return to UMass to offer a course now and then on an ad hoc basis.

(subject to change in certain weeks)