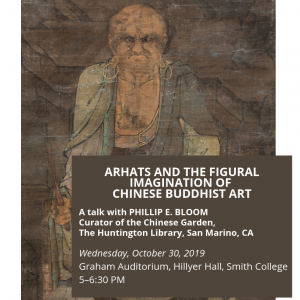 https://www.smith.edu/artmuseum/Events/Lectures
In conjunction with the exhibition Buddhism/Buddhisms: Across Asia and Beyond, currently on view at the Smith College Museum of Art (September 25, 2019–June 21, 2020)

A dizzying variety of eccentric figures fill Chinese Buddhist paintings of the Song dynasty (960–1279) onward. Wizened monks dance through the air on clouds; their younger compatriots cavort with dragons and receive offerings from animals and deities. Who are these figures, and what was their appeal to practitioners of Buddhism? More generally, what role did figural paintings play in the lives and practices of premodern Buddhists? Focusing particularly on depictions of arhats—semi-human, semi-divine monks widely worshipped in East Asia for their supramundane powers—this talk will show that such playful paintings of unconventional figures served as media through which premodern viewers imaginatively experienced subject positions other than their own. Figure painting, we shall see, became a prompt for poetic experiences of awakening.