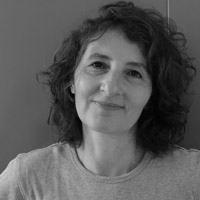 Susan Jahoda is an artist, educator, and organizer whose work includes video, photography, text, performance, installation and research based collaborative projects. Works have been produced for venues  in London, Paris, Basel, New York, Seoul, and Moscow.  Currently, Jahoda is a core member of BFAMFAPhD, and a co-founder of The Pedagogy Group, collectives of socially engaged artists and educators based in New York City. Jahoda has organized exhibitions and screenings including Documents from the Greenham Common Women’s Peace Camp, Interference Archive, Brooklyn, (2014-15), Susan Kleckner and Documents from the Greenham Common Women's Peace Camp, (2013), The Martha Rosler Library, and Beyond the Instance of an Ending, (2009), Setting in Motion (2006), and Global Priority (2002), This is My body: this is My Blood, (1992), Herter Art Gallery, UMass, Amherst. She has published short stories and essays including "Spring Flowers," in Class and its Others, University of Minnesota Press, (2000) and “Theatres of Madness," in Deviant Bodies, Indiana University Press, (1995). In 1993, Jahoda joined the collective and journal, Rethinking Marxism, where she continued to serve as arts editor until 2014.

Her projects have received funding from the National Endowment for the Arts, The New York Foundation for the Arts, and The Trust for Mutual Understanding, NYC. Recent residences, along with members of her collective BFAMFAPhD, include New Inc, New Museum of Contemporary Art, New York, NY, (2016-17) and Project Third, Pratt Institute, Brooklyn, NY, (2018).