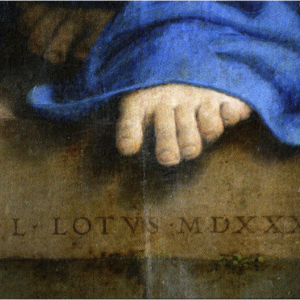 The sixteenth-century Venetian painter Lorenzo Lotto was unusually scrupulous about signing his paintings. As an itinerant artist, it behooved him to record, and advertise, his authorship, but he also gave special credence to the allusive potential of his last name. When he was commissioned to provide designs for the intarsia choir of S. Maria Maggiore in Bergamo, he took it upon himself to add the subject of “the five cities of Sodom” (i.e., Lot and his Daughters) because, as he explained to his patrons, “it encloses my surname, Loto.” In other instances he played off the Latin forms “lotus” (“washed”) and “lotium” (“urine,” abbreviated as “lot”). Themes of washing and urinating are pictographic signatures in several of his works, sometimes combined together. This paper investigates how Lotto’s “signature acts” evolved over the course of his career and how the serious jokes on his name relate to his larger artistic project.