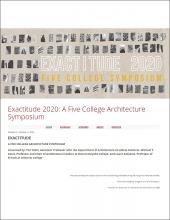 This fully online lecture series focused on the ever-growing need for precision and efficiency within the architectural practice. The goal of this event was to inspire a conversation on different understandings and meanings of the word “exactitude” within the context of contemporary and future architectural practice through lectures and discussions with both academics and practitioners within the field of architecture. Different from currently ongoing themes such as sustainability, performance and formal innovation, this symposium focuses on a wider narrative which sets architecture back in its creative position through engagement with two themes evoked by Italo Calvino in his Six Memos for the New Millennium: Exactitude (as a first symposium) and Multiplicity (as a second symposium planned for 2022).

The following three questions were the focus of the Exactitude symposium:

The Exactitude symposium was scheduled over a two-day period with four and five-hour scheduled lectures and presentations, respectively.  Apart from organizers and academics at the University of Massachusetts Amherst, the first day of the symposium included lecture presentations by Chris Benfey, Alejandro Zaera-Polo, Mark Wigley, Eric Höweler and Francesca Hughes. Similarly, the second day day included lecture presentations by Alicia Imperiale, Antoine Picon, Sunil Bald, Teresa Stoppani, LOT-EK, Ada Tolla and Giuseppe Lignano with Thomas de Monchaux, and Cynthia Davidson. Participation was open to public and participants had an opportunity to engage with questions and to participate in panel discussions.