Skyscrapers made of wood? NBM show argues for alternative to steel, concrete.

Anyone who looks up while walking Washington’s streets can reckon what the building material of the future is. Most new structures feature glass walls, which have turned downtown into a giant peep show. Stone and concrete facades are being stripped and replaced with even more of the tempered, transparent material.

“Timber City,” an illuminating if not see-through exhibition at the National Building Museum, proposes an alternative. Tomorrow’s buildings will — or should — be constructed of wood. Structures of prefabricated wooden panels can be erected faster than steel-and-concrete ones and could substantially reduce global carbon dioxide emissions.

Wooden buildings are lighter, and thus require much smaller foundations. This is significant not just for financial reasons. Concrete manufacturing is the world’s third-largest source of greenhouse gases, and harvesting timber — a renewable resource — has a lower environmental cost than mining the materials to make steel and concrete. Also, wood is 15 times as thermally efficient as concrete, reducing heating and air-conditioning demands. 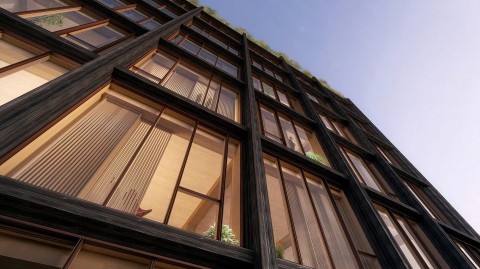 A new 10-story residential building on West 18th Street in New York is the city’s first structural timber building and will, the show explains, reduce energy consumption by 50 percent. Wood also sequesters rather than emits carbon.

What if the kids in Apt. 8C play with matches? Fire is the principal reason building codes in the United States and elsewhere discourage or ban wood. But the structures “Timber City” extols are not rustic log cabins or the wood-and-paper houses of the city later renamed Tokyo, which used to burn so often that blazes were called “the flowers of Edo.”

Today’s wood-frame structures employ such new materials as cross-laminated timber (CLT) and laminated veneer lumber, engineered composites that combine multiple pieces for greater strength. These resist fire better than unprotected steel, which weakens faster than wood when heated. Charring its exterior actually protects wood from fire, so it wasn’t just a poetic gesture when a recently constructed Oregon fire station was covered with blackened wood from a flame-damaged local barn.

Wood is seen these days as primarily decorative. But wooden structures, charred or not, can stand for centuries. The exhibition includes pictures of the country’s oldest one, Fairbanks House in Massachusetts, built in 1641, and the world’s most venerable wooden pagoda, China’s Sakyamuni, which dates to 1056.

Wood may never enter one of architecture’s most pointless competitions — the quest to build ever-higher skyscrapers in places that generally have no other landmarks. But Skidmore, Owings & Merrill has designed a 42-story tower that, if built, will have a carbon footprint 60 percent smaller than a same-size edifice erected with steel and concrete.

There would be concrete in that wooden skyscraper, just less of it than in a conventional structure. “Wood environments make people happy,” chirps the show’s text, yet “Timber City” doesn’t forecast a future of all-wood buildings. The design department hall at the University of Massachusetts at Amherst, scheduled for completion next year, will feature an aluminum facade wrapped around its wooden skeleton. And, of course, wood frames can support glass curtain walls just as steel ones do.

Exhibition curators and designers Yugon Kim and Tomomi Itakura, founding partners of the Boston architecture firm IKD, include architectural models, a video about managed forests and a world map that highlights more than 30 notable recent wooden buildings. There’s also a selection of tree stumps, examples of manufactured wood and types of lumber waste (nearly all of which can be used commercially). 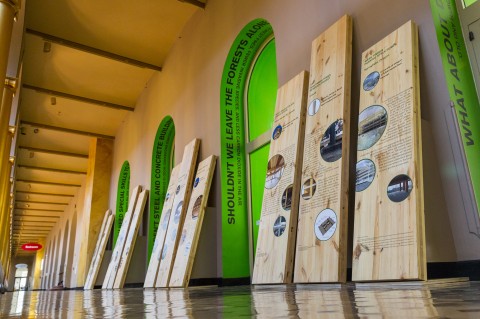 Most of the show’s copious information is printed on Douglas fir panels that dominate the exhibition. These are smaller cousins of the two largest pieces on display: a 63-foot vertical, which reaches the museum’s third floor, and a 40-foot horizontal. The panels also give the second-floor gallery a pleasant aroma.

Although printing the text on giant planks is picturesque, it doesn’t disguise that the show is as wordy as it is woodsy. This is a forest of data, one in which visitors could get lost. The young and the restless may want to leave before they learn very much about CLT, sustainability and the struggle to update anti-wood building codes.

Yet “Timber City” should engross those who don’t mind an exhibition that’s more text than pictures, more ideas than artifacts. If those ideas are as viable as they seem here, we will someday walk through neighborhoods where wooden buildings are as common as steel-and-glass ones are now.

This story was originally published by the The Washington Post.