At a ribbon-cutting ceremony on March 22, Chancellor Kumble R. Subbaswamy said the “stunningly beautiful” building advances the university’s national recognition for it commitment to sustainability.

Designed by architect Sigrid Miller Pollin of the UMass Amherst architecture department and built with a $10 million grant from an anonymous donor, the building is designed to produce as much 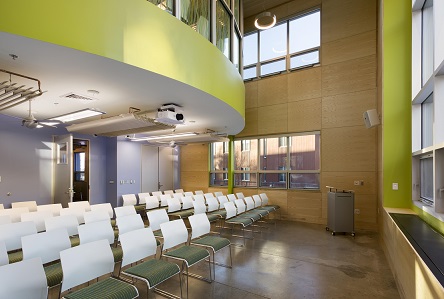 energy as it consumes and as such would be the first net-zero building on campus. It will use about one-fifth the energy of the average office building in this climate.

Michael Ash, chairman of the economics department, said the entire economics faculty will now be housed in Crotty and neighboring Gordon Hall, which also hosts the Political Economy Research Institute (PERI) and the School of Public Policy. Both include economics faculty.

“It’s going to be great for the department to be in a beautiful space and to have the PERI people close to the rest of the economics faculty,” Ash said. “It’s comfortable, environmentally sustainable and has a great feel in terms of light and space.”

Ash said three of the four conference rooms can double as classrooms, and the building includes well-lit and comfortable spaces where students can study or just relax.

Miller Pollin said she found challenges in placing the building on such a narrow, sloping lot, but “challenges can promote good design,” she says.

She said the building achieves its energy efficiency by integrating a number of features.

The walls, roof and foundation are heavily insulated, and the roof is covered with high-efficiency solar voltaic panels, which are not visible from the street.

Eight geothermal wells reach about 450 feet deep to draw heating and cooling water that remains a near-constant 52 degrees all year. Heat is transferred by radiant panels on the ceilings, and all windows are three layers of glass.

Sensors contribute to the conservation. “The building detects if your windows are open when they shouldn’t be open, and a signal is sent to the building manager,” she said.

Part of the design challenge was to site the building “as a neighbor” to Gordon Hall, which Miller Pollin also designed. She said Crotty Hall’s lines do not compete with the angles of Gordon Hall, and its zinc siding is complementary to Gordon.

Landscaping includes terraced rain gardens that filter rain water as it goes downhill into a lower wetland area. “The hope is in the spring and summer it will be colorful,” she said. 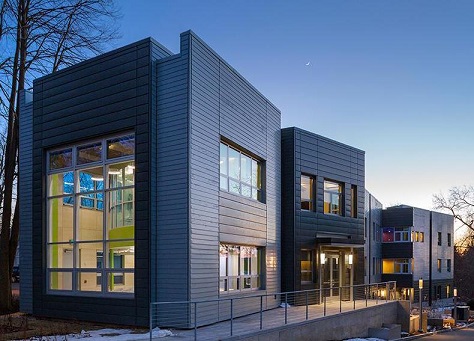 The building is named in honor of James and Pamela Crotty.

James Crotty, professor emeritus of economics, is widely recognized for his fundamental contributions to macroeconomics within the broad tradition that synthesizes Marxian and Keynesian analytic frameworks. A UMass Amherst faculty member for 36 years, he is respected for his decades of commitment to building a first-rate political economy program. James was critical to the creation of PERI, and continues to contribute to its work.

Pamela Crotty, a registered nurse beginning in 1960 until her recent retirement, has contributed to the field of gerontology. She was also an active member of the Union for Radical Political Economics and one of the first non-economists to participate in the annual URPE summer conferences. She is former member of the URPE Steering Committee.