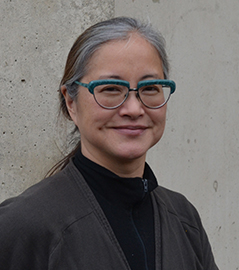 Educated at Harvard-Radcliffe (B.A. Environmental Design) and The Harvard Graduate School of Design (M. Arch I), Professor Ray Kinoshita Mann has been teaching at the University of Massachusetts, Amherst since 1995, and was awarded tenure in 2001.  Her award-winning projects include the Women’s Rights National Historical Park, the MIT Media Lab ‘Brain Opera’ and Salamander Restaurant in Boston. As principal of RK Studio Architecture she received a Progressive Architecture Young Architects Award in 1993 for the innovative nature of her practice, and she continues to work with a variety of new materials and unusual design applications.

Over the years she has taught a variety of courses from architecture and interior design studios to building physics, universal design and research theory, and she has been an active participant in a Mellon-funded Five College Bridging Grant to bring together Liberal Arts and professional architectural pedagogies. She has served on a variety of local and national boards.