Farshid Moussavi Lecture and a Conversation with Pari Riahi 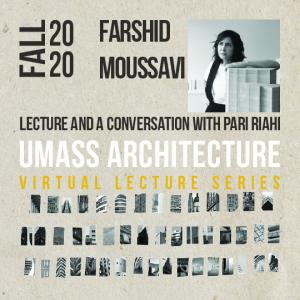 Farshid Moussavi OBE RA is an internationally acclaimed architect and Professor in Practice of Architecture at Harvard University Graduate School of Design. Moussavi’s approach is characterised by an openness to change and a commitment to the intellectual and cultural life of architecture. Alongside leading an award-winning architectural practice, Farshid Moussavi Architecture (FMA), she lectures regularly at arts institutions and schools of architecture worldwide and is a published author. Moussavi was appointed Officer of the Order of the British Empire (OBE) in the 2018 Queen’s Birthday Honours for services to architecture. She was elected a Royal Academician in 2015 and Professor of Architecture at the RA Schools in 2017.

At FMA, Moussavi’s completed projects include the acclaimed Museum of Contemporary Art in Cleveland, USA; La Folie Divine, a residential complex in Montpellier; a multi-tenure residential complex in the La Défense district of Paris, and flagship stores for Victoria Beckham in London and Hong Kong. Current projects include an Ismaili Center for the city of Houston in the Unites States, and, a new residential complex for the the city of Montpellier. Previously Moussavi was co-founder of the internationally renowned London-based Foreign Office Architects (FOA) where she co-authored many award-winning international projects including the Yokohama International Cruise Terminal and the Spanish Pavilion at the Aichi International Expo, London’s Ravensbourne College of Media and Communication and the Leicester John Lewis Department Store and Cineplex.

Moussavi’s ideas and work are at the forefront of critical debate about architecture. In 2017 she was Architectural curator of the Royal Academy Summer Show where she proposed a highly original approach, showing the internal mechanisms and the construction process that underpins architecture. Her work is deeply rooted in critical research which she carries out through FunctionLab, the research branch of FMA. FunctionLab explores cultural questions that find actualisation in the building commissions of the office, allowing for informed and innovative results. With the influential series of books that Moussavi published with Harvard, The Function of…, she has explored the theory and built history of ornament, form, and style.

Educated at Harvard’s Graduate School of Design, University College London and Dundee University, Moussavi has taught and served as External Examiner in academic institutions worldwide. She was the Chair of the Master Jury of the Aga Khan Award for Architecture in 2004, and a member of its Steering Committee between 2005 and 2015, as well as a trustee of the Whitechapel gallery, and, The Architecture Foundation between 2009 and 2018. Since 2018, she has been a trustee of the Norman Foster Foundation London and New Architecture Writers (NAW) which focuses on black and minority ethnic emerging writers who are under-represented across design journalism and curation. Moussavi also serves on the academic court of The London School of Architecture.

Register for this Event