THE DEPARTMENT OF ARCHITECTURE

Clay Beaudoin
Title: Urban Inter-Space: Convergence of Human Interaction and Form
The Urban Inter-Space shows how the convergence of human interaction and form can activate underused spaces and catalyze future community developments through the integration of dynamic, expandable modules into an urban context. By taking into consideration varying physical characteristics of the different types of program that are explored through an iterative design process, an individual module can be developed to adapt to a variety of functions. This module is capable of being expanded and contracted through human interaction and physical operations, and when populated within an urban condition, it allows the people of those communities to activate leftover spaces and reclaim them as dynamic makerspaces for a variety of creative processes. 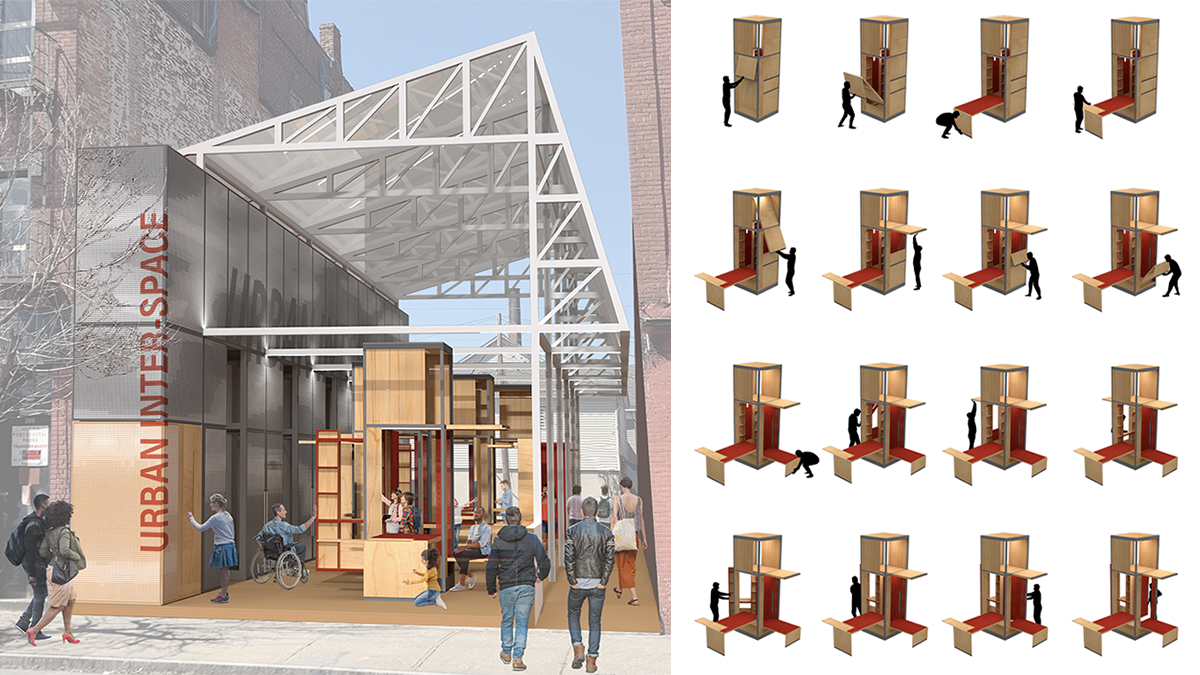 Emily Moreau
Title: Rethinking School Design to Promote Safety and Positivity
Through the design of a new high school for Chelmsford, MA I explored the question of safety in schools during a time where tragedies occur all too often in schools. By creating a beautiful space that is open to the community in addition to the students, faculty and staff, I aimed to inspire empathy in each user, therefore creating a deeper level of respect for the building and those who occupy it. 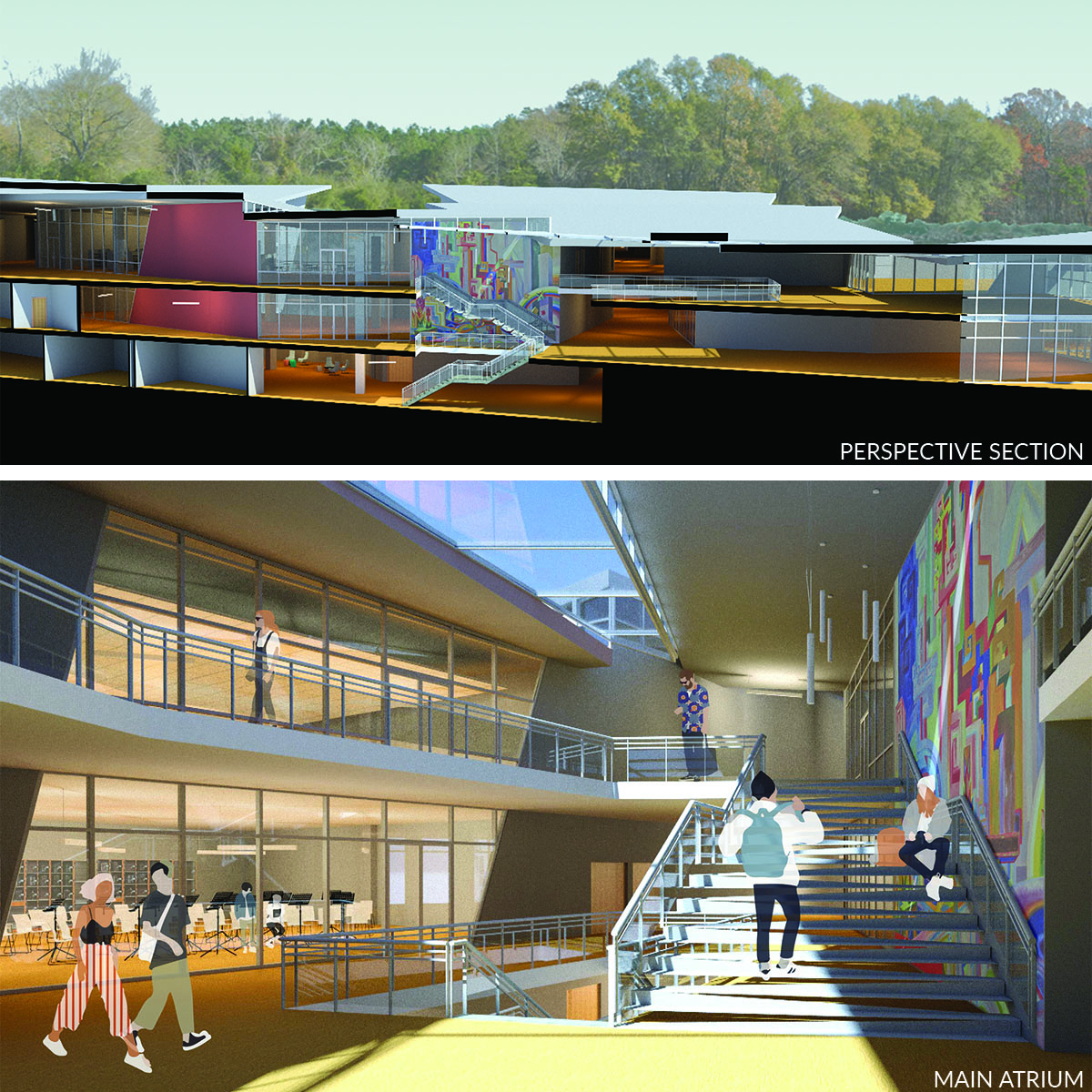 Madeline Szczypinski
Title: Spatial Design for Behavioral Education
The proposed behavioral school for kindergarten through 7th grade in Northampton, Massachusetts utilizes the built environment as a tool to aid human cognition, emotion, and behavior for students who suffer from emotional behavioral disorder. By identifying common challenges, strategic design elements aim to support the building’s program and occupants to achieve specific goals, i.e. academic standards, and behavioral self-management. Implementations range from broad overarching themes including biophilia, behavior-defined space, safety, and transitions down to environmental-behavioral-neurology principles that manifest themselves in the built environment. 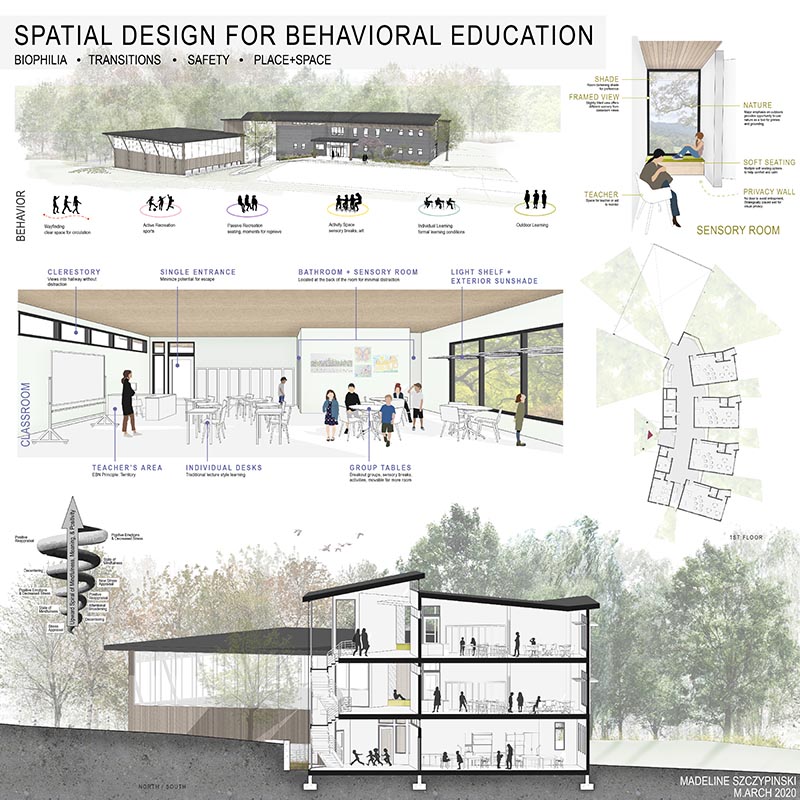 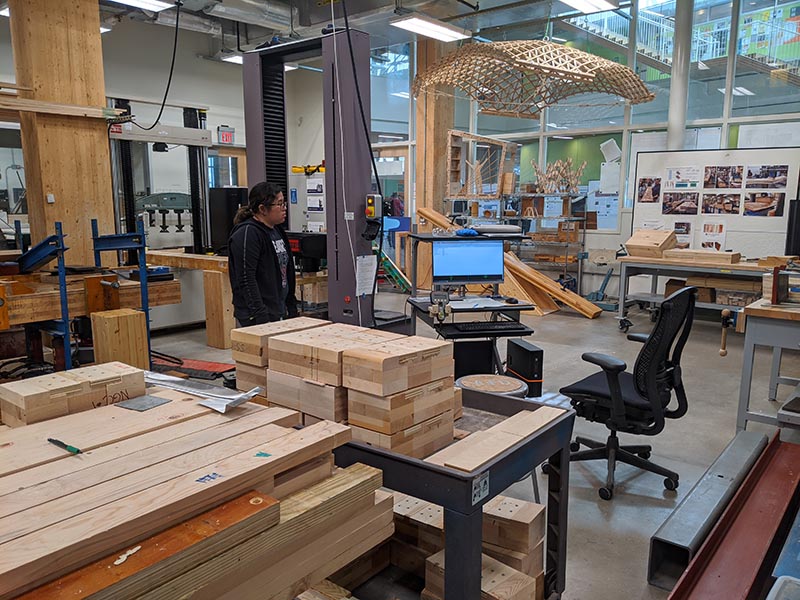 Aaron Speagle, MS in Sustainable Building Systems || Supervisor Prof. Schreyer
Title: BIM Capstone Project
My project is centered around the 90-year-old fraternity house I manage in State College Pennsylvania. Due to the age of the home and heavy use (usually 25-40 people living there) over the decades, my organization is gearing up to do some fundraising for improvements to the house that will make it more functional for today’s college students. I will be sharing this model, and plan set to help with fundraising for the potential implementation of some of the design options proposed by my project. 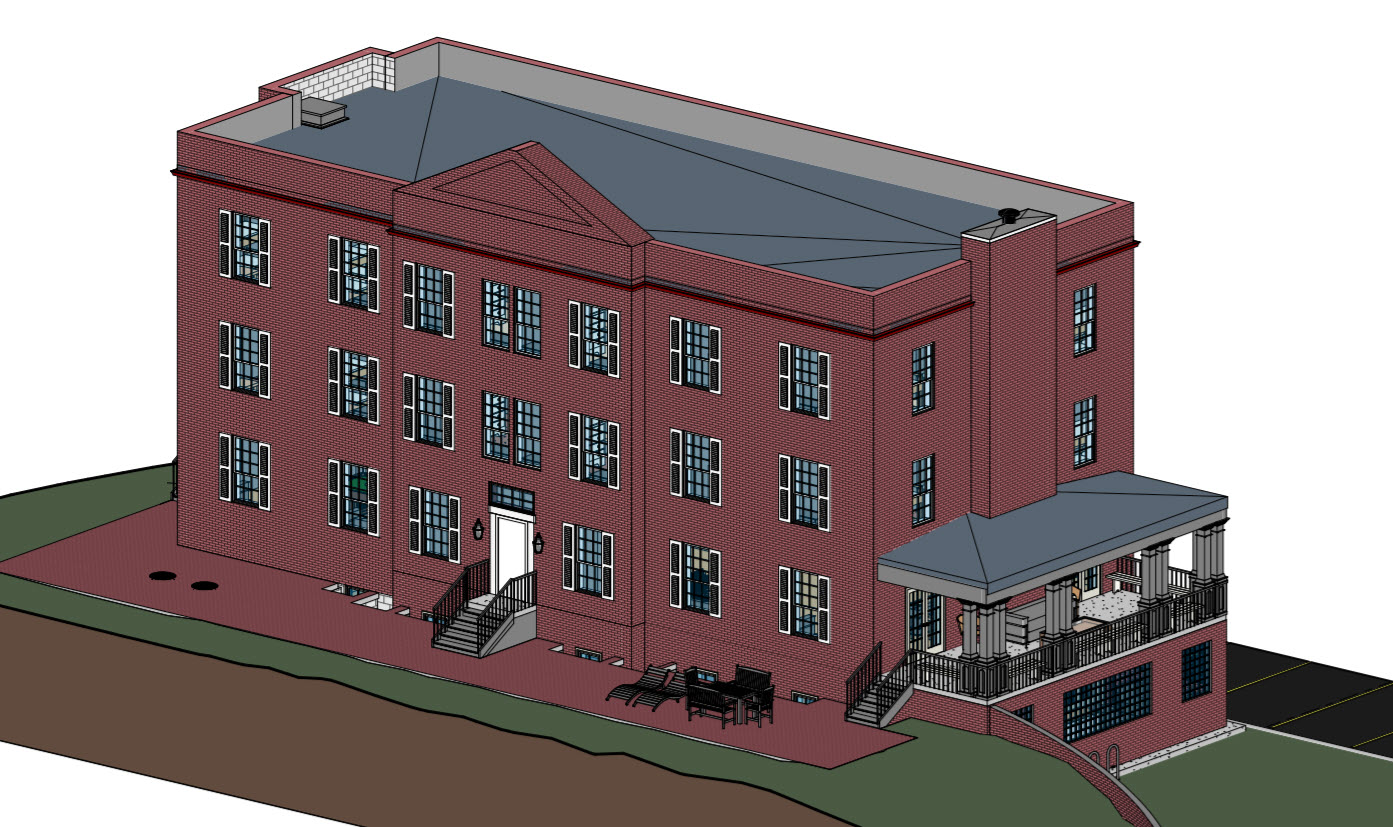 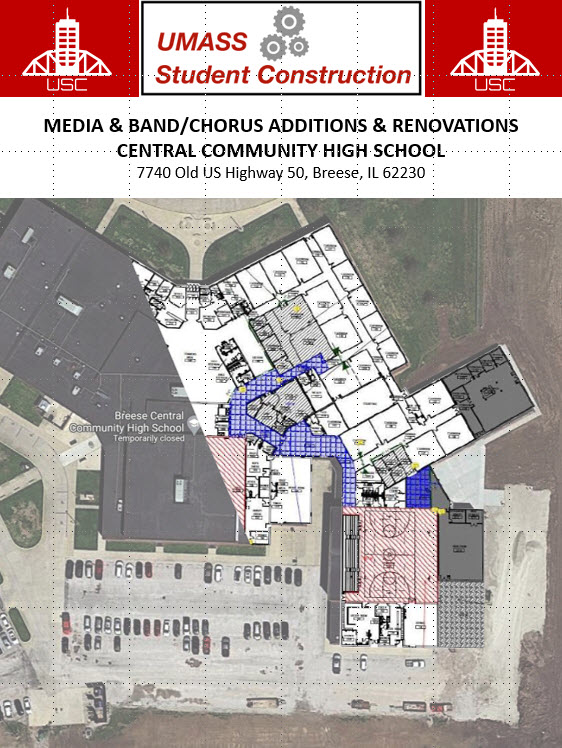 THE DEPARTMENT OF LANDSCAPE ARCHITECTURE AND REGIONAL PLANNING

Allyson Fairweather
Title: Correctional Landscape Studies: Improving the Restorative Potential
The purpose of this project is to explore the intersection between landscape architecture, restorative environments, and prison reform by answering the question, “how can the design of outdoor spaces in carceral environments bring the benefits of spending time in nature to inmates and correctional staff?” Although landscape architects cannot fix the issues that have led the US to having the highest incarceration rate in the world, this project demonstrates that we can play a meaningful role in restoring the benefits of nature in correctional landscapes and help improve the lives of offenders and staff, alike. 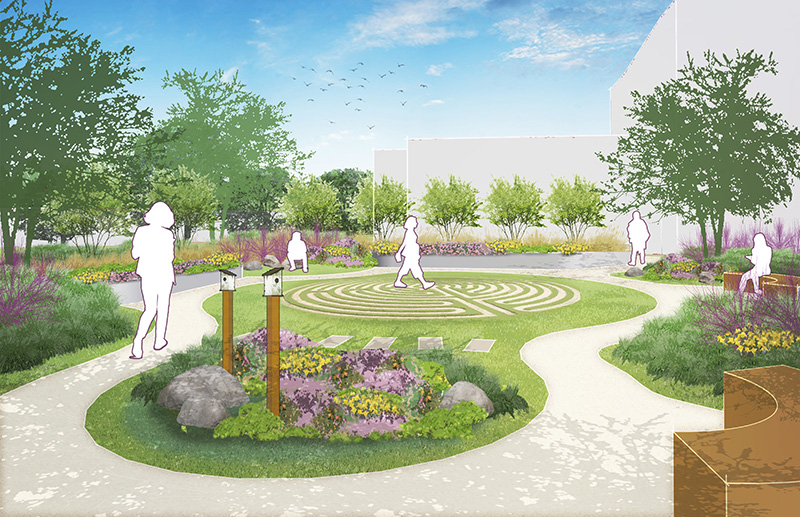 James Mealey
Title: Past and Future at Pleasure Bay: Restoring Coastal Landscape Experience at an Historic Urban Park
At the end of the 19th century, Pleasure Bay served as a site of reinvention for the relationship between the people of Boston and their legendary harbor. Today, it should do so again, this time in response to the 21st-century challenges of anticipated sea-level rise, habitat loss, and urban development. 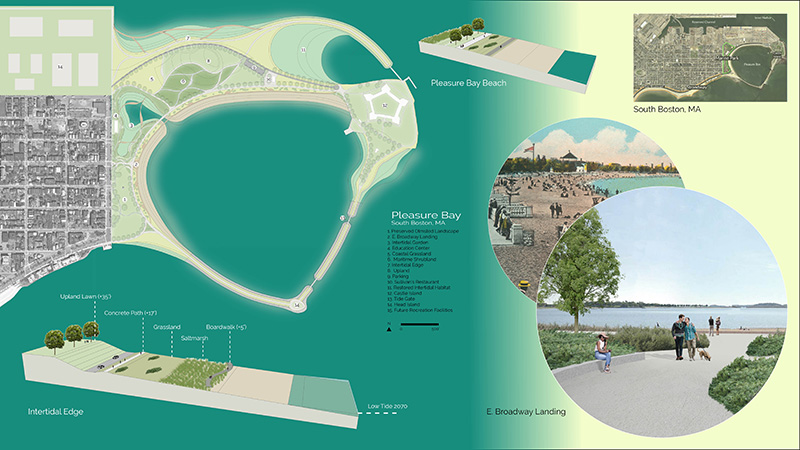 Peter Wackernagel
Title: The Pocasset Swamp Memorial
For my thesis project I studied the theory and design of memorials. I applied this research to a project on the site of the Pocasset Swamp Fight, a battle in the King Philip's War. Influenced primarily by counter-memorials and ideas from indigenous activism, I designed an expanded memorial and ceremonial landscape based on the cosmological forms traditionally used by Algonquian people in cultural features like the Powwow Arena, wigwams, and even the three-sisters garden. 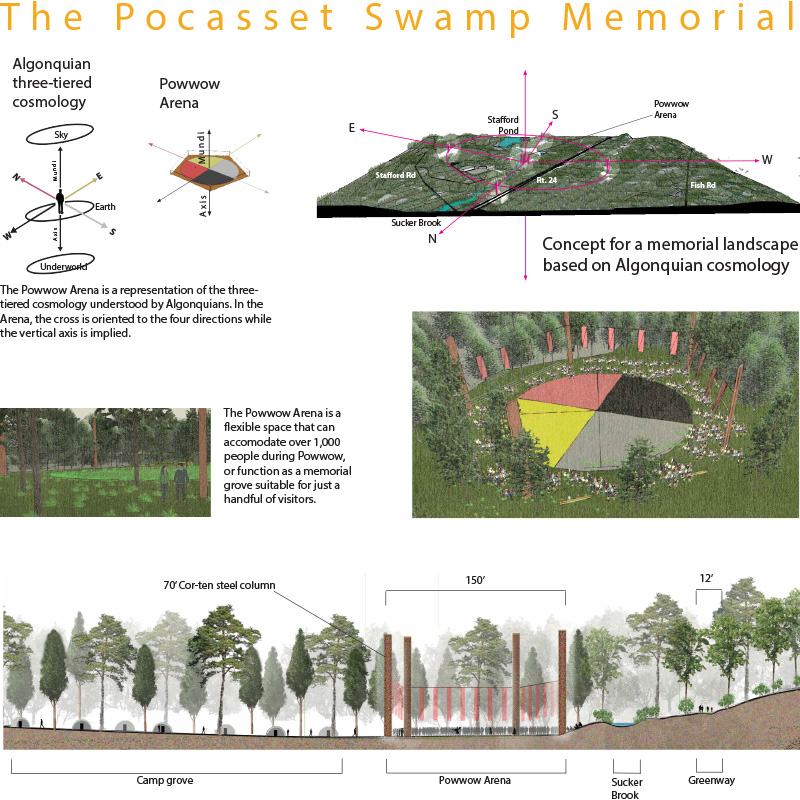