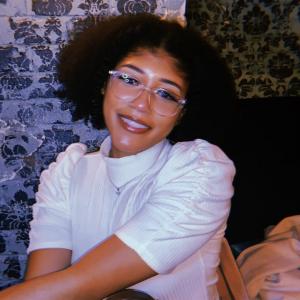 Chayanne Chataigne is a senior here at the University of Massachusetts Amherst. A resident of Worcester, MA, she decided on UMass Amherst due to its proximity to home and financial aid offerings. Chayanne was initially a psychology major, but during the fall of her first year she took a general education course on Afro-American history from 1619 to 1860. In the spring, she took Introduction to Black Studies. Eventually, she made the decision to add the Black Studies major to enrich her academic path. She is soon graduating with a dual degree in psychology and Afro-Am Studies.

What attracted you to Black Studies?

I never really learned about Black studies or anything like that in high school, or at any point really in my educational experience. So I thought a lot of the information was very enlightening and good to learn about, and talk about with other people who are like-minded.

I also really like how the formats of the classes were different from my psych classes. Afro-Am is more reading, discussion, and writing-focused. I mean, yes, you’ll have exams in some classes depending on the instructor, but they’re different from other classes that are more lecture-based.

Do you have any favorite classes?

I have two favorites. One of them, I took in the spring semester of my sophomore year. It was Race and the American Story with professor Shonekan, and it was a one-day a week class so I was already attracted to it. It was a really small class and we ended up taking a trip to Arizona that year as a part of an annual symposium. We attended this event because professor Shonekan had colleagues at different schools who were also teaching the same exact class with their students. One of her colleagues was at Arizona State University. So then we had a symposium with the students who were taking the class there, and we had a major discussion, and we had keynote speakers. And we were in Tempe, Arizona, which was so beautiful—really different from Massachusetts, which tends to be cold in April. It was just nice to be somewhere warm, and the hotel was nice too. We got to explore nightlife on the last night. It was a really good experience. That was definitely one of my favorite classes.

Another favorite class I took this past fall was with professor Parker. She taught Black Love, Sex, and Marriage in the US — which is an amazing class. By far, definitely in my top two favorite classes of Afro-Am for sure. I like all the classes I take. I really do like all of them, but if I had to choose, those two are definitely my favorites.

I like the way that they teach, because they’re all very passionate about the topics. It’s not just like, “Oh you work in this department and we want you to teach this class so you have to teach it like this.” Yes, that can happen, but they have a lot of knowledge about what they’re teaching, and they have passion for it, which makes it easier to consume and digest.

How do you plan to use your degrees after graduating?

One of my career goals is to become a psychotherapist specifically for Black demographics. I want to get my doctorate in either clinical or counseling psychology, but I am taking a break from school for the next one to three years because I did a dual degree — so I did a lot more work than most people usually do in college. Also, I want to make sure I don’t lose my motivation for school and my career goals; I need to take a break so I don’t feel burnt out. So I’m just planning to work in research positions and just getting more clinical experience as well in the time being — of course, a salary position because I need to be paid what I’m worth. But I just want to do that for a little bit, take a step back from school, save money, and get myself together for grad school.

And then, before I go to apply for doctoral programs, I want to get my MBA in health administration. For one, I do plan on opening my own private practice of therapy in the future. Secondly, I want to partially own a hospital in the future as well. I want to be a stakeholder in a hospital, so I want to start getting into the business administration side. Depending on how I feel after that, I’ll either just go straight through to doctoral, or take another quick break. We’ll see. That’s down the line.

Now at her last semester at UMass Amherst, Chayanne has certainly built an impressive resume that aligns with her degrees and career goals. For instance, she was heavily involved with the UMass Amherst Center for Women and Community (CWC), first as a front desk staffer, then later as a rape crisis advocate taking hotline calls in support of domestic violence survivors in Hampshire County.

Today, she serves Black demographics as the president of the Black Mass Communication Project (BMCP). They are a hip-hop-focused organization that develops programming for Black and POC communities on campus. In the past, they’ve hosted the annual homecoming party and SoulFest — a week full of educational and social events.

Chayanne’s best advice for students within the Afro-Am Studies major is to keep an open mind: “I took an introduction class on African American political science, which is a very interesting class, but I did not anticipate just how interested I was going to be in it and how intriguing it all was. Keep an open mind because that’s how you’re going to learn more than what you want to learn. And when I say that, you know, you always want to learn more than what you anticipate to learn out of your major.”

Lastly, she recommends keeping in touch with TA’s, professors, and advisors, who “want to help you just as much as you want to be helped.”