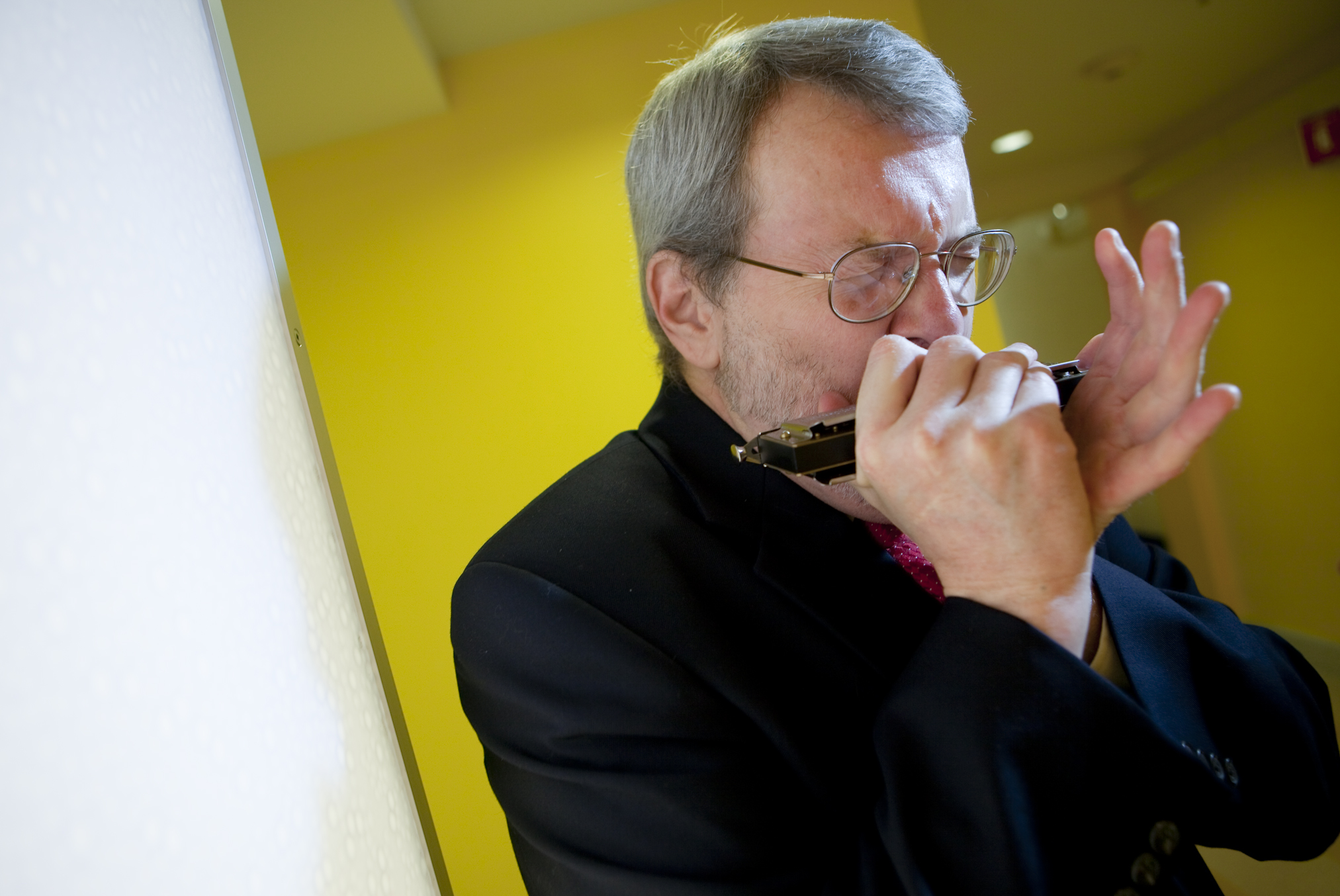 Steven C. Tracy is Distinguished University Professor of Afro-American Studies at UMass Amherst. Tracy, who has written, edited, co-edited, of provided introductions for 30 books, is author of Langston Hughes and the Blues (U of Illinois Press 1988), Going to Cincinnati: A History of the Blues in the Queen City (U of Illinois P, 1993), A Brush with the Blues (1997), and Hot Music, Ragmentation, and the Bluing of American Literature (University of Alabama Press, 2015). He also served as general co-editor of The Collected Works of Langston Hughes (U of Missouri P, 2001-2004) and editor of Write Me a Few of Your Lines: A Blues Reader (UMass P, 1999), Langston Hughes: Works for Children and Young Adults (U of Missouri P, 2001), A Historical Guide to Langston Hughes (Oxford UP, 2004), A Historical Guide to Ralph Ellison (Oxford UP, 2004), After Winter: The Life and Work of Sterling A. Brown (with John Edgar Tidwell Oxford UP, 2009), and Black Writers of the Chicago Renaissance (University of Illinois Press, 2012). Tracy provided the introduction for Howard W. Odum’s novels Rainbow Round My Shoulder (Indiana University Press, 2006) and Wings On My Feet, and for Roark Bradford's John Henry (Oxford UP 2008). A Chinese translation of Tracy’s first book, Langston Hughes and the Blues, will be published by Wuhan University Press, 2016. His second book, Going to Cincinnati, was awarded the ARSC Award for a work on jazz, blues, or gospel music, and is listed as an essential book in 100 Books That Every Blues Lover Should Own, along with Write Me a Few of Your Lines, which is listed in the essential reference works.

He has contributed more than 100 essays to journals, dictionaries, encyclopedias, critical works, and textbooks on topics such as African American music, James Baldwin, T.S. Eliot, Ralph Ellison, Sutton Griggs, John Lee Hooker, Langston Hughes, Howlin’ Wolf, Blind Lemon Jefferson, Little Walter, William Carlos Williams, August Wilson, Richard Wright, and others, including the Harlem Renaissance entry for The Princeton Encyclopedia of Poetry and Poetics (4th ed.). He has lectured and presented at conferences in such places as France, Belgium, Italy, England, Germany, China, and Canada. In 2010, he was placed on the roster of Senior Specialists of the Fulbright Foundation, and served as Senior Specialist teaching and lecturing at the University of Konstanz in Germany. He has also been named as a prestigious Chu Tian Scholar (the most prestigious scholarly award in Hubei Province, China) at Central China Normal University, where he has taught, lectured and performed two months a year for five years under the auspices of the Chinese government. Most recently, he has traveled many times to China to give keynote addresses and a series of over 70 lectures on American and African American literature and music at a wide selection of Chinese universities. He teaches and lectures in China on a continuing basis, and will lecture on the Kinsey world-traveling exhibit and perform two concerts in Hong Kong at the University of Hong Kong in 2017. He has also consulted with the US Government on their Ralph Ellison postage stamp, and has co-authored with Fangfang Zhu the bibliography “Blues” in Oxford Bibliographies in African American Studies. Ed. Gene Jarrett. New York: Oxford University Press, 2016. He was inducted into the Honor Society of Phi Kappa Phi, University of Massachusetts, Amherst, April 10, 2016.

Tracy has performed on radio and television multiple times, including the Johnny Carson Tonight Show in 1971, numerous NPR shows, and on local Cincinnati stations. In 2014 Tracy was featured on Wuhan Television Channel 6, the city’s major television station. Three television hosts conducted two separate interviews, one on location at the university and one in the television station studios. The interviews discussed his personal, academic and musical background and how they have operated separately and dovetailed in his career. Tracy performed “John Henry,” “Swing Low, Sweet Chariot,” and “Blues in A” during the interviews, and was also videotaped at the conference talking to participants. In 2015 he was featured on Wuhan Television Channel 6, the city’s major television station, discussing his book Hot Music, Ragmentation, and the Bluing of American Literature and performing "I Can't Help It." He also served as a website consultant for the Martin Scorsese / NPR Blues series, advisor for AMERICAN EPIC - A Journey Through the Music that Transformed America for PBS, as well as an advisor for the Curriculum team of the James Baldwin Project, and advisor for the Dream Documentary Project video of Langston Hughes. Tracy serves on the editorial Board of Foreign Language and Literature Research, Wuhan, China.

A singer and harmonica player, Tracy has recorded with his own band, Pigmeat Jarrett, Big Joe Duskin, and Albert Washington, and the Cincinnati Symphony Orchestra, and opened for B.B. King, Muddy Waters, Albert King, Sonny Terry and Brownie McGhee, James Cotton, Canned Heat, Johnny Winter, and many others. While a senior at Walnut Hills High School, Steve won a national harmonica championship for ages 13-18 that put him as a guest on the Johnny Carson Tonight Show, initiating his career as a performer. He also appeared locally on a number of variety shows, including Nick Clooney’s (George’s father) and Bob Braun’s, taking along Cincinnati bluesmen when possible. Tracy toured the Netherlands with Steve Tracy and the Crawling Kingsnakes following the release of the CD Going to Cincinnati, performing also in the UK, France, China, and via teleconference to Israel. He has also written 50 CD liner notes for a variety of labels, including Document Records, and for Albert Washington's two releases on Ace (UK). As a long-time researcher and supporter of the Cincinnati blues scene, Tracy organized his activities in such a way as to emphasize the importance of the scene in a variety of ways. As a writer for Blues Unlimited, Living Blues, Jefferson, and Juke Blues, he document the history and contemporary Cincinnati blues scene. Steve has also served as a co-performer, sometime booking agent, and friend of a variety of bluesmen, helping nurture the careers of Cincinnati's elder statesmen of the blues. Steve spent over a decade as a blues DJ on WAIF, WNOP, and WVXU radio stations during that time helping to organize blues days and blues cruises on the Ohio River. He produced an LP by Pigmeat Jarrett for June Appal Records, which brought Pigmeat some national acclaim and gigs outside the country, and he did Pigmeat's obituary on NPR. He received the Lifetime Achievement Award from the Greater Cincinnati Blues Society along with his friend Albert Washington the year he left Cincinnati for Massachusetts.

http://jbr.openlibrary.manchester.ac.uk/index.php/jbr/article/view/10/Multi-Media2
Hour-long lecture performance on James Baldwin Conference in the south of France

Segments of a television interview on Wuhan, China TV (2)

https://www.youtube.com/watch?v=RalquXH6iw4
Performance of "Going Down to the Graveyard" at Cincinnati Blues Festival

https://soundcloud.com/reddirteast
Performance of three songs from CD I Bleed Through My Soul